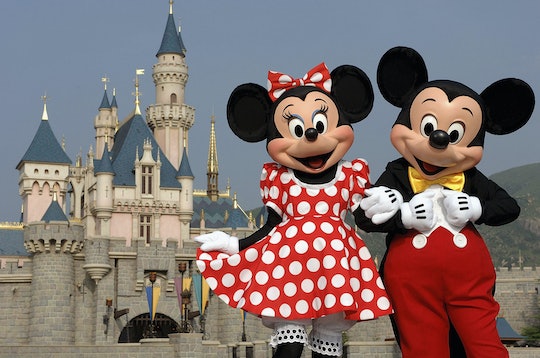 Disney-loving brides just got the best news ever: Bridal mouse ears by Vera Wang are coming to make your wedding day even more magical. It's all part of the brand new Disney Parks Designer Collection, which will give some of the biggest names in fashion the chance to put their own spin on the iconic headwear.

The Vera Wang Disney Minnie Mouse ear headband will feature hand sewn crystals and pearl embroidery, plus a veil fluttering off the back. An official photo hasn't been released yet, but if you toggle over to the right on @verawanggang's Instagram post below, you'll see the adorable artist's rendering. The caption noted that real silk and tulle fabrics will be used in the piece, the same materials used in the designer's famous wedding gowns. The headband will look oh so cute whether you use it in some adorable wedding day pics, or throw it on to chill out in the happiest place on earth for your honeymoon.

2019 brides unfortunately won't be able snag one just yet, however. The bridal ears will roll out sometime Spring 2020. There will be plenty of fun new mouse ear designs between now and then, though, with new pairs being unveiled each month. Heidi Klum, Betsey Johnson, and Karlie Kloss are all designing pairs, according to People, plus brands like ALEX AND ANI and COACH.

The first ears from the collection are a stars and striped inspired set by Harveys, which go on sale on May 24 — perfect for patriotic summer fun and hitting up the parks on July 4. Six more designs will debut later this summer, as well. I'm definitely going to be marking my calendar for Spring 2020, not only to check out the bridal ears but also for a matching mommy and me set by Cupcakes and Cashmere launching around the same time.

If you're getting married this year and are bummed the Vera Wang mouse ears won't be out before your big day, there's one option from the Disney store that may work for you in the meantime. This Minnie Mouse bridal ear hat ($28, shopDisney) is super cute, with rhinestones, a tiara, and a glittery shimmer all over. It may not sit as well with a chic bridal up-do as the Vera Wang ears headband would, but it could definitely make for some adorable photos. And don't forget that there are some amazing (if not Disney official) Minnie Mouse bridals ears on Etsy, too.

The Disney Parks Designer Collection will be available in stores at both Disneyland and Disney World, as well as online at shopDisney.com. All of the new designs are limited-edition, which means you'll have to act fast if you want to get your hands on a pair. And now matter which set you've got your eye on, you'll probably want to start saving now. Blog Mickey reported that ears from the Designer Collection will range from $58 to $600. They may not come cheap, but for Disney fans, they'll be the collector's item of a lifetime.