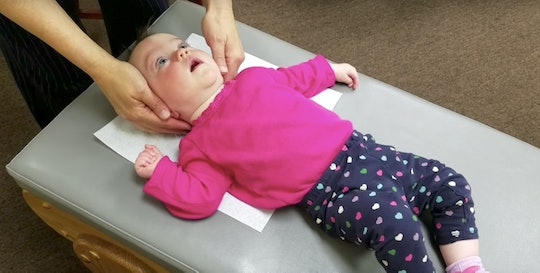 These Videos Of Babies At The Chiropractor Are Hard To Watch, But Some Swear By it

When it comes to making an infant comfortable, and stop crying, parents will try anything. Which is why it not's so surprising that more and more parents are taking their baby to the chiropractor, though not everyone agrees that it's a great thing for babies. According to the American Chiropractic Association website, there are allegedly a lot of benefits to bringing your baby to get straightened out.

In an email statement to Romper, the ACA noted that pediatric chiropractic care is gaining popularity. In 2000, there were 30 million pediatric visits to a chiropractor and by 2009, those visits had more than doubled to 68 million.

And it's not just for babies, either. The National Board of Chiropractic Examiners found in 2010 that 17 percent of chiropractic patients are under the age of 18 and 7.7 percent of that number were 5 years old or younger. It takes a special chiropractor to work with kids, and they have to practice in a special way.

It’s a completely different process when you work with kids, and you have to know what you’re doing in order to treat them appropriately. You need to know the proper techniques, contacts and depth. The contacts need to be smaller and the thrust more shallow with less force. Pediatric chiropractic is extremely safe if you know what you’re doing, but less so if you don’t.

A 2008 study found that there were no serious adverse effects to pediatric chiropractic care, but not everyone swears by it. According to the National Institute of Health, physicians debate the merits of chiropractic care for infants and note that practices aren't standardized yet, which means the quality of care can vary from specialist to specialist.

Parents take their infants to the chiropractor for a number of reasons, namely colic. In 2012, the ACA found that colicky babies decreased their crying time by 48 percent after chiropractic care, compared to just 18 percent in babies who didn't get any care. The Centers for Disease Control and Prevention also lists chiropractic care as the leading alternative method of care for American infants, so people are obviously really pleased with the results of their visits.

However, some people take issue with the practice. In 2016, an Australian chiropractor came under fire after a video showing him "cracking" a baby's back went viral. It does look like everything you're not supposed to do with a baby, even if it allegedly works.

But, there are tons of other videos out there — here are a few more:

Parents start early, too. According to WKBW Buffalo, an ABC news affiliate, pediatric chiropractic care can help with nursing, too. Abbey Cole has taken her 4-week-old son, Caleb, to the chiropractor twice since he was born. “He nursed well, but I had some pain, so I thought maybe there was something going on with his mouth or the way he was turning,” she said in an interview with WKBW.

Dr. Alaina Rowswell-Kulikowski told WKBW that she saw the infant was having trouble rotating his neck. After some adjustments, there were no more issues. Cole said, "It has made a difference since. Nursing is no big deal now."

Some People Swear By It

But, Others Aren't As Convinced

Rowswell-Kulikowski told WKBW that it helps the entire family relax. She thinks that when both parents and baby are getting adjusted, it can help with their overall well-being. "There are lots of moms out there where their babies aren’t really bonding that well because they’re unhappy. They’re screaming and crying a lot. Mom is exhausted. Dad is exhausted," Rowswell-Kulikowski told the news station. And according to her, adjustments can ease all of that stress.

Jeanette Pohl is another parent who brings her 8-year-old and 10-year-old to see Amherst Dr. Steve Niemiec about once a month and swears by it. She told WKBW, "I’ve just seen a tremendous benefit for my kids. They’re just calmer, there’s this peace about them, their bodies are just back in balance and readjusted."

If you think it might help your infant or your family, you should check with your doctor or talk to your own chiropractor about the possible benefits or downsides to pediatric adjustments. Just make sure you're talking to a pediatric specialist before making any moves. To calm a colicky baby, anything safe is worth a shot, right?