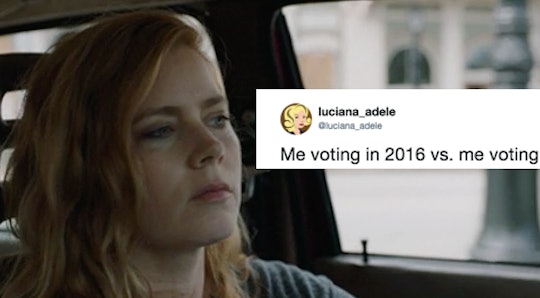 After the highly polarizing election in 2016, many turned their agendas not to what would happen in 2020, rather, a more significant — yet often overlooked — aspect of our democratic system: the midterm elections. Today, Nov. 6, the country will vote for state and county leaders, and that's important, because the individuals in the Senate, Congress and other forms of government have just as much power, if not collectively more, than one federal figurehead in the Oval Office. Though it's a serious moment, these voting in 2016 vs. voting in 2018 memes will remind you why you need to hit the polls today, because a lot has changed in two years.

What is anything in life if the internet cannot make a meme of it? (Nothing, that's what.) Kidding aside, people have really gone out of their way with this: you may see friends or family members posting these side-by-side photos of pictures representing how they felt voting two years ago, and how they feel voting now. Usually, the former image is someone or something looking peaceful and relaxed, and the latter someone or something looking upset, angry, or as though they just came out of a battle.

Honestly, if they don't at least get you a laugh, they're a somber reminder of why it's so important to cast your vote and be heard, especially at a political juncture like this.

Prince Harry might not have any stake in the U.S. election, but his expression of interest and concern turned into a cartoon-like, manic, eyes-peeled chaos is one that almost anyone can probably relate to at this point.

If nothing else, the past two years have incentivized women to weaponize their votes and fight for what they believe. The Wonder Woman imagery is a nice touch.

Rather than saying what she looks like in 2018, Whitney Friedlander noted that though she was totally over it in 2016, the future is going to look similar to A Handmaids Tale if we don't get out and vote today.

4. Actually, Maybe Not Much Has Changed

For those who feel just as exhausted and unenthused as they did in 2016, 2018 is just a continuation of this particular circle of hell.

5. From Cute Dog To Snarling Wolf

If nothing else, everything that's happened in the last two years has changed a lot of people: how they think, how active they are in elections... and how motivated they feel to discover their inner warrior wolf.

Luciana Adele frames it nicely: many people entered 2016 with the hope that November would produce the first female president. Many also entered 2018 with their hopes dashed, feelings exhausted and thoughts racing to the point of tears. Nicely summed up.

7. No Time For Dressing Up

All that matters is getting out there and having your voice heard.

There's no more time for fun and games... or colorful bowties.

9. Shocked & Exhausted Pretty Much Sums It Up

We all knew it wasn't going to be good... but some of the goings on in the United States have even shocked the most jaded among us.

Yep, people are letting their inner beasts out.

11. Even Tony Is Frazzled

You know things are bad when your mental state can best be compared to a frazzled drawing of a cartoon cereal box mascot.

12. Even Lana Del Rey Is Ready

The queen of all things mystical and eerily zen has traded flowers in her hair for weaponry.

Screaming loudly into the void pretty much sums up the entire vibe of this year... or presidential term.

There are so many more excellent memes out there to be marveled at... but the point stands: get out and vote. Everyone depends on it.