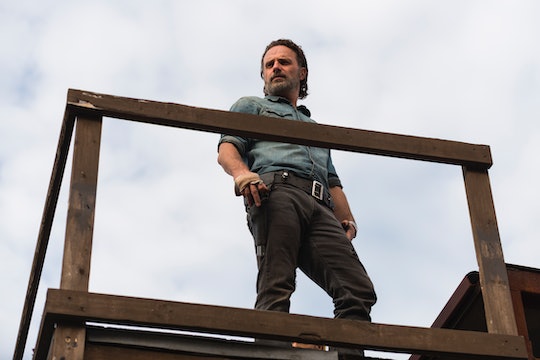 The Season 7 finale of The Walking Dead ended on a hopeful note, despite all the carnage that precipitated it. It was quite a change from the deeply dour premiere, which was a relief, and it put the show's heroes back on top — if only momentarily. Their first strike against Negan and his Savior army was far from an overwhelming victory, but they did emerge triumphant in the altercation. Tigers snacked on faces, Rick got to wave a gun around again, and Negan was sent running from Alexandria. But there will be more battles to come, as some of these Walking Dead Season 8 theories speculate about.

Even in the comics, the fight against Negan is a long one that takes many victories and losses before it eventually resolves in a huge battle. There are sure to be more casualties on the show as Rick and Negan continue their struggle to get the upper hand, which will keep fans on the edges of their seats as they wonder just who might not make it out of Season 8 alive. Season 7 took Glenn, Abraham, Spencer, Heath, Richard, Olivia, and Sasha (not counting Saviors, because they deserved it). The next season might result in an even bigger bloodbath, especially with war on the horizon. Here are a few theories to help get you excited/scared for what's to come next.

Though fans would riot if Daryl ever kicked the bucket, it's still a theory that comes up every now and then. It would be a controversial moment that would change everything for the series going forward. Though The Walking Dead features quite a lot of character death, they're not always as shocking as the show would like viewers to believe; Daryl dying would be major. And it could be the perfect shocker for the Season 8 premiere, which is the 100th episode, as DarylWinchester313 pointed out on Reddit. Daryl's thirst for revenge could very well prove to be his undoing. And since Daryl doesn't exist in the comics, his fate could go in any direction.

Daryl Takes Over The Sanctuary

By the same token, Daryl could end up taking over a storyline from the comics that belongs to another character. In the comics, Dwight ends up being a very important part of Rick's support team after they finally overthrow Negan; he even ends up running the Sanctuary and leading the remaining Saviors. But Reddit user DarylWinchester313 put forth the theory that Daryl could take over that role instead, particularly because TV audiences never warmed to Dwight and wouldn't be sorry to see him go. It would also be nice to see Daryl do something besides mumble for a change.

The Big Battle May Still Be A Ways Off

Some fans have tried to predict how Season 8 will line up with the comics, with Reddit user Suh-Sol-Jashin wondering if the next season will end with the much-hyped final battle from All Out War. That would mean roughly 16 episodes of back and forth fighting until the big final battle, which does fit with how the show has been adapting the comics so far. Usually one arc will play out over the course of the season. However, that has led to the last few seasons being pretty slow, making a few fans hope things will unfold differently.

After All Out War in the comics, there's a two-year time jump that's explored in an arc called A New Beginning. While some think this time jump will occur in the Season 9 premiere, others think it could be the perfect way to jumpstart the second half of Season 8. It would be a big adjustment, but it would also pick up the pace a little. Reddit user Starboy316 also proposed that the time jump could be even longer; it could be five years instead of two, making Carl's age finally catch up with Chandler Riggs' and aging all the babies out of toddlerhood.

The Walking Dead probably won't be back until the fall, so fans have plenty of time to theorize before Season 8 begins.