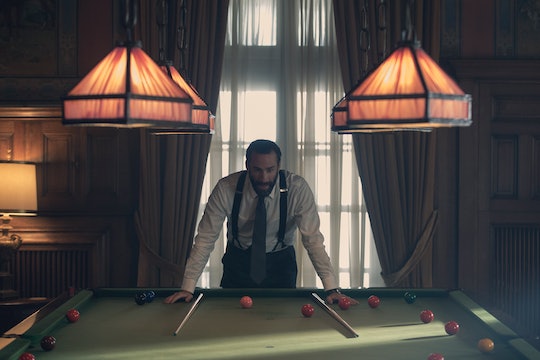 Something Is Brewing Between Waterford & Winslow On 'The Handmaid's Tale'

As if the drama couldn’t get any more intense, a recent episode of The Handmaid’s Tale introduced a new character to heat things up even more. Commander George Winslow (Christopher Meloni) is offering Fred Waterford a lot more than just a new job and a place to stay, and their potential relationship could have a huge impact on everyone around them. Fans are already foreshadowing theories about a Winslow and Waterford affair on The Handmaid’s Tale and what it could mean for Serena and June.

Warning: Spoilers ahead for The Handmaid’s Tale Season 3, Episode 6.

In the sixth episode of the season, titled “Household,” Fred (Joseph Fiennes) and Serena (Yvonne Strahovski) take June (Elisabeth Moss) to Washington D.C. in hopes of finding a way to get baby Nichole back from Canada. They are invited to stay with Commander Winslow and his wife, Olivia (Elizabeth Reaser), and upon arriving at their house, they discover that the couple has a houseful of children.

When the two commanders are finally alone playing a game of pool, as George compliments Fred on his strategy of using propaganda videos to get Canada to negotiate Nichole’s return, he also manages to create some sexual tension. “The presentation of that power,” George says as he intentionally bends over in front of Fred to make a shot. “It was a stroke of genius.” Then, after telling Fred he could get him a permanent posting in D.C., George rubs Fred’s shoulder and suggestively says that a man of his “talents could be an asset.”

Fans were quick to notice this subtle sexual advance, and many think that it will lead to an affair between the two commanders. Being gay in Gilead is a crime punishable by death, but fans think Fred would easily break the law to advance his career.

“I don’t want to throw on the tinfoil hat but do you think Fred would sleep with him and then gender traitor to get a higher position,” wrote Reddit user nadehlaaay. “I think it would be a great twist if it turned out a high ranking commander was secretly gay. It begs the question ‘what is more important to Fred; his power or his piety?’ And I think we all know the answer to that.”

Some think that George is trying to trap Fred, either to sleep with him and be quiet about it, or to eliminate him altogether. “I could totally see Fred refusing Commander Stabler's advances, and Stabler turning it around on Fred and saying he is a gender traitor,” theorized Redditor AngelSucked. “Or, CS even raping Fred, and then accusing him of being a gender traitor, especially if Fred does something REALLY dumb in the next couple episodes or so.”

Reddit user oceanadix thinks that George is just playing this game with Fred to take away his power. “I vote for it being a trap” they wrote. “Easy way to get rid of the Waterfords.”

But most viewers can’t help but notice the irony of the situation. For so long, Fred has used his power to sexually assault and rape women, and now the tables are turned. “Fred knew exactly what that was and was uncomfortable,” wrote Redditor HoffyTheBaker. “I think this is gonna become a karma situation, where old Freddy has to do some things he doesn't like to get what he wants, just like the handmaids do. Everyone abuses power in Gilead and I think Fred knows he's gonna have to play along or else.”

Many fans pointed out that George is dangling a shiny new job in Fred’s face as an incentive to get in bed with him, which makes Fred the powerless party in this relationship. “What if Winslow makes sure Fred gets a posting in D.C. but expects something in return,” asks Reddit user whereismycaffiene. “I think it would be poetic justice if Fred became a sex slave.”

These fan theories could easily come true, and personally, I’d love to see Fred get a dose of his own medicine. As the season progresses, I’m sure fans will get a clearer picture on both George and Fred’s intentions, and more importantly, see how their relationship impacts Serena and June.