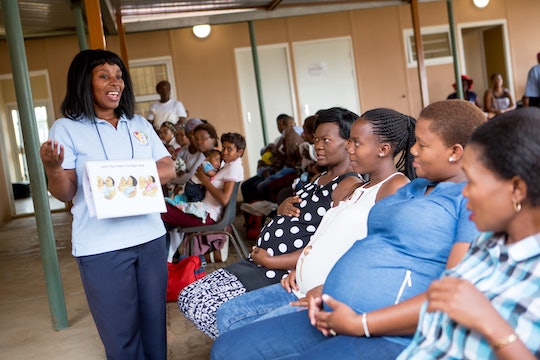 Irene Nkosi, who grew up in Ermelo, Mpumalanga, South Africa, was just 16 when she became pregnant for the first time after a man who "promised her heaven" raped her. She tells Romper that, at that time, her father and stepmother were neglecting her. She had to beg for food. She slept in the streets. And suddenly she found herself pregnant, though she didn't even know what pregnancy was. Six years later, when she was struggling to feed her daughter still, she became pregnant again. This time she went to the clinic to confirm the pregnancy, and the nurse suggested that she take an HIV test.

"By that time we only knew that HIV was the killer disease," Nkosi, now 33 years old, says. "And if you get HIV, people will just think you are selling your body, like you are a whore." Nkosi says that people with HIV are ostracized by their families, so many who are HIV-positive end up committing suicide.

She describes the moment when the nurse processed her HIV test:

So I was looking at those lines, and while she was busy singing a song ... I just looked and I see one line coming, and I thought ‘OK, I’m good.’ But then the other line was coming in. Oh my god. I started being upset, and I didn’t want to hear anything that she was going to tell me. And I cried. I remember I cried, I cried, I cried. And she said to me, ‘Here’s the treatment. You need to take this treatment every day, and go home.’

(Above) Irene Nkosi working with a mentee in a South Africa clinic.

And just like that, with one 6-year-old child already whom she could barely feed, another child on the way, and a life-altering diagnosis, Nkosi was simply sent home.

Though she was devastated, Nkosi said she decided to immediately tell her friends and family that she was HIV-positive, despite knowing about the stigma that the diagnosis carries, simply because she needed someone to talk to. Before she gave birth to her first child, she had moved to live with her biological mother, whom she hoped would love her regardless of the diagnosis and this second pregnancy. But, immediately, her mother and the rest of her community isolated her. No one wanted to eat where she had eaten, touch a glass that she had used, or even sit in a chair that she had sat in. After being neglected as a child, Nkosi says this isolation, especially from her mother, was unbearable:

It’s not nice being not wanted. I needed this love for so many years, and now, while I have a chance to get it, it’s been ripped away from me again.

The next week, Nkosi had an appointment to go to the clinic again for a checkup. She says that she had some questions to ask the nurse, but once she asked them and returned home, she planned to kill herself. "I had poison ready for me," she says. "I had everything set."

But then, during the check-up, the nurse told her that if she was interested, an organization working with the clinic might have a job for her. The nurse said the organization was looking for an HIV-positive woman who was willing to speak out and help other women with HIV. Nkosi says that she thought the company might have a cure for HIV, though the nurse didn't tell her that, so she went home and threw out her poison, applied to the position, and then went to the training for a new program called mothers2mothers2be. The organization was working to help stop mother-to-child transmission (MTCT) of HIV and AIDS by having mothers with HIV mentor pregnant women who have been diagnosed with the virus.

"This Is Not A Death Sentence"

mothers2mothers2be, which is now called just mothers2mothers, was founded in South Africa in 2001 by Dr. Mitch Besser, an OB-GYN from the United States who worked at the University of Cape Town and treated local HIV-positive pregnant women. Robin Smalley, who joined mothers2mothers as a co-founder in 2004, tells Romper that Besser got the idea after testing women for HIV in his clinic. The women would test HIV-positive, and then Besser wouldn't be able to communicate with them because of language barriers (there are 11 official languages in South Africa).

"He had to go get the janitor to give her that life-altering news," Smalley says. And then those women would believe they have received a death sentence, both because of the stigma surrounding HIV but also because they didn't know that mother-to-child transmission of HIV is entirely preventable with medication. Finally, Smalley says Besser realized that the women he had diagnosed could be educated easily not only to help keep their babies HIV-free but then to turn around and teach what they knew to other pregnant women who had been diagnosed.

"What better way to support a frightened young woman who’s pregnant and finds out she’s HIV-positive than to hear it from another woman that she trusts who’s from the community, who speaks the language, who survived and is healthy and can show, by example, that this is not a death sentence," Smalley says.

And so mothers2mothers began. Now, the organization trains HIV-positive women, provides them with a salary, and places them in understaffed health centers in vulnerable communities, where they are matched with other HIV-positive, newly pregnant women to teach them about the treatment they'll need to take and help prevent the spread of HIV to their children.

I’m going to walk with you through this journey until the point where you are empowered enough to empower other women.

The method is proven, too. mothers2mothers' fact sheet claims:

What makes the program unlike many others is that while it protects babies, it provides women who thought their lives were over with a new community, increased financial security, and the dignity that comes with being a positive example for others. Nkosi says she cannot stress enough how much she feels she needs to do for mothers2mothers, because the organization really did save her life. Nkosi's second child died unexpectedly in pre-school, and mothers2mothers provided her with invaluable support after that devastating loss. Now, Nkosi has a husband with whom she had a child, and she supports them and her first child with the salary from mothers2mothers. She also went back to school and received her high school degree.

"Being able to support my household — to take care of my kids, to give them the love that was missing while I was their age — it’s something special," Nkosi says.

To be able to support other mothers who are just like her is also incredibly special, and empowering, she says:

The first thing that I tell [HIV-positive pregnant women] is that ‘You are not alone. We are in the same boat. I’m also HIV-positive. I’ve been there. So I’m going to walk with you through this journey until the point where you are empowered enough to empower other women.'

If they see me living today, I’m a living example for them. So they see me living. I’m right here, I’m beautiful, I’m standing right next to them, and they’re going to want to be like me and they know that I’m HIV-positive.

Why This Issue Requires Global Support

Smalley says that facility-based Mentor Mothers like Nkosi meet with their mentees whenever the women visit the clinic, but mothers2mothers is embedding its mentors directly in vulnerable communities as well. Facility-based mentors can work with community-based Mentor Mothers, who identify newly-pregnant women who maybe live far from clinics. The community-based mentors can get those newly pregnant women tested for HIV, leading to earlier treatment for HIV-positive women, which means a better long-term prognosis.

Smalley stresses that American women really have no idea just how bad things can be for pregnant women in Africa, and that's exactly why they should care. She says hospitals and clinics in most of Sub-Saharan Africa are very frightening places. "It’s very common for a nurse, when a woman is in labor, to haul off and smack her in the head," Smalley says. "It’s called 'a klop,' because [the nurse] needs the room. The mother is taking too long. It’s like, 'hurry up, get the baby out.'"

That's assuming a woman can even travel to a hospital to deliver or receive medical care at all. This immediately makes everything harder for these women: getting prenatal care, giving birth, getting postpartum care, and being able to breastfeed — all while struggling to live with the stigma of an HIV diagnosis.

mothers2mothers provides mothers with support so they can disclose their HIV status to their families, "because there’s no way they can adhere to their treatment consistently if they don’t," Smalley says. Additionally, once the baby is born, HIV-positive mothers need enough support so that they can exclusively breastfeed. Combining breast and bottle feeding increases the risk of infection for the newborn. According to UNICEF, which cited a WHO report:

It is believed that mixed feeding in the first six months carries a greater risk of transmission because the other liquids and foods given to the baby alongside the breastmilk can damage the already delicate and permeable gut wall of the small infant and allow the virus to be transmitted more easily.

Mentor Mothers receive trainings every six months so that they are updated on the most recent recommendations for HIV-transmission prevention from organizations like the World Health Organization and UNICEF.

But why should any of this important work that mothers2mothers is doing matter to moms in the United States? First, caring about other people and wanting to help them is the right thing to do. Second, and less obvious, widespread epidemics that kill children can undermine an entire region's stability, which can have effects on nations and economies across oceans. "We live in a global world now," Smalley says. "If an entire population of people lives without hope that their children can have a future, there’s going to be terrorism. And you don’t want to see terrorism like you would see if the entire continent of African families loses faith that they can provide a better future for their children, one the includes health and hope. If that happens, none of us will live in peace."

The goal that drives Nkosi is for women — especially HIV-negative women — to be empowered with knowledge about HIV. "I was once HIV-negative, before I become HIV-positive," she says. "And if an HIV-negative person, if she’s well-educated about HIV and she knows that an HIV-positive person won’t just infect you just by looking at her or just by sitting next to her or just by being friends with her, then it’s going to make our world a very peaceful world."