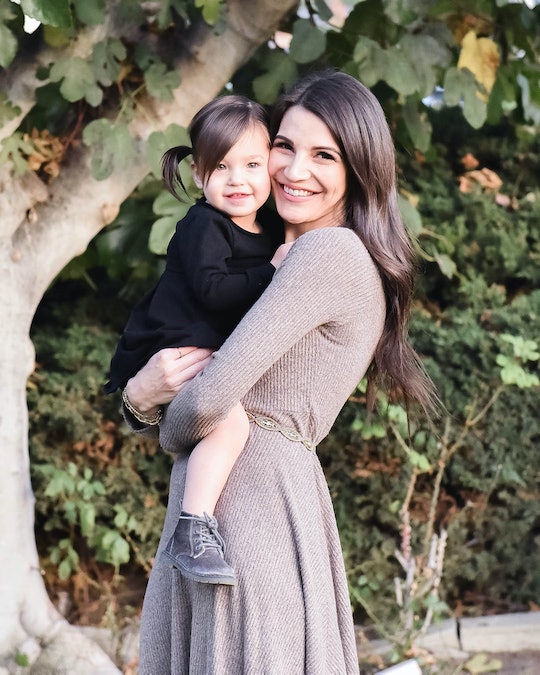 These Women Say Having A Child Increased Their E.Q.

Elation. Happiness. Joy. Panic. Extreme fear. Just some of the emotions that any new parent feels and experiences, and can relate to. But what if becoming a parent can not only make you more in-tune with your emotions, but actually improve your capability to recognize them and react appropriately to them? That capability is called E.Q., which stands for “emotional intelligence quotient,” and as with your I.Q., increasing your E.Q. means you are getting smarter, only this time, it’s not about your ability to understand the Pythagorean theorem.

Studies have shown that people with a higher E.Q. tend to be more successful and fulfilled in their careers, relationships, and life in general, as noted in a paper by Nobel prize winner James Heckman in Proceedings of the National Academy of Sciences. It’s also believed to be a learned behavior (and not something you’re necessarily born with). That said, can moms learn, through parenting, to be more emotionally adept? Or do we just become that way automatically?

“It’s finally being acknowledged by the scientific community that mothers go through amazing brain changes that affect them on a deep level,” Dr. Jonice Webb, a Massachusetts-based therapist, and author of Running on Empty, tells Romper.

California-based psychotherapist Alicia Racine of CAST Centers agrees. “Similar to puberty, the overwhelming hormonal shifts and the way our brain changes neurologically, can also create new and uncomfortable emotions. These emotions have a great impact on a woman’s identity,” Racine tells Romper via email.

While those extra few pounds and post-breastfeeding saggy breasts are changes you can see, now, here’s evidence that there are changes happening that we can’t see with the naked eye.

“There is a great quote that says ‘when a baby is born, so is a mother,’” says wellness coach and certified doula Maria Carola. “Everyone is so focused on the baby, that they neglect the changes a mother is going through during this time. Many moms even go through an emotional ‘birth’ of sorts, as childbirth can stir up emotions from past traumas, such as unresolved issues with their own mothers.”

In fact, many moms attest that this very phenomenon happened to them. You can read books on E.Q. and even take a course online – but these moms didn’t do any of those things. They simply, in the words of Whitney Houston, got so emotional, baby, and it happened, well, after baby.

“When a child is crying, mom must be able to put herself in his shoes (i.e., empathize) and figure out what he needs from her,” says Webb. The same goes for a defiant child who won’t stop going near a hot stove. “In these types of situations, mom is managing her anxiety in a way that allows her to effectively teach the child, without taking it out on him.”

For a mom, all of these requirements are like exercising her “emotional muscles.” Just like getting in those daily workouts at the gym, exercising these muscles will theoretically improve her ability to manage these emotions over time, and will trickle into other areas of her life. Romper spoke with eight women who say motherhood increased their E.Q.

“I became a softie.”

Forty-three-year-old Lynn Brandt was a movie buff. Violence, gore, drama — nothing was off-limits, she loved it all. And she never had to break out the tissues — until she had children.

“Now, if someone in a movie or on TV mistreats a child, even just talks down to one, it breaks my heart. I literally cry at everything — I even stop watching the movie!”

Valerie Perkins, a 37-year-old mom of two, swapped partying for peace, and hasn’t looked back since. “After the emotional and physical experience of childbirth, I couldn’t fathom putting any toxins into my body,” says Perkins. “I realized not only was I sharing a body with someone during pregnancy, but a life forever, and that my purpose was now much greater than looking hot and going to the best parties.”

Perkins now finds her solace in yoga and meditation, and not at the bar.

The worst thing imaginable that can happen to any parent, happened to Crystal Webster. Eight years ago, on what was supposed to be the happiest day of her life, her precious baby girl passed away in her arms, shortly after she gave birth to her.

“Before Madelyn, I was all about keeping up with the Joneses,” explains Webster. “I cared about what car you drove, what people wore, and anyone who had a different opinion than me was automatically wrong.” Then the unimaginable happened.

“I had to make a lot of hard decisions when they told us something was wrong with Madelyn. Whether or not to terminate the pregnancy, putting myself at risk, whether we should try to have more children afterwards, and how to bury my child. It made me a lot more sensitive to other people, and what they were going through. It really brought me down to earth. That stuff I cared about before, no longer mattered.”

Webster quit her “day job” to start a company focused solely on helping grieving parents like herself, Sharing Solace.

“I empathized with the opposite sex, and learned gender equality.”

“When I had my son, I really became in touch with his emotions, and all the pressures he was feeling on a daily basis. He’s a boy, but he’s also a human being. I want him to understand that emotions come in all shapes and sizes and it’s OK for boys to have them and show them!”

“I could better relate to other people’s kids.”

For 40-year old fifth-grade teacher Karrie Pizza, being around children was nothing new to her. But, she says, it was only when she had a child herself, that she became much better at her job.

“I became more thoughtful about the words I chose when communicating with them, and their individual needs as little humans.”

“I learned how to manage many emotions at once.”

Erin Musto was an upstate New York mom with three girls 5 and under. At home with two toddlers and a child in kindergarten, and suffering from postpartum depression, she struggled to keep it all together. “My days were full of so many emotions. I was tired, I was cranky, I was happy, I was snuggly, all in the span of five minutes. It was so weird,” Musto tells Romper.

Then, without warning, her eldest, Madeline, was diagnosed with an inoperable tumor on her brainstem. She passed away just five days later. She was 5 years old.

“I watched her illness steal her smile, her ability to walk, her last heartbeat and eventually her last breath. I sat with my husband and two other daughters and we sang to Madeline in heaven. At that moment, I felt the most extreme pain, but I also felt joy. I had gratitude for the amount of time we were able to have Madeline with us, right next to an empty brokenness that rode along on the coattails of that gratitude. Grief is the cost of love, and I learned that firsthand,” she explains.

Musto started a foundation in Maddie’s honor and now helps other families who experience the loss of a child.

“I became a humanitarian.”

We all know that becoming a parent comes with a ton of responsibility. But for some moms, like Connecticut-mom Kristin Koloniaris, they feel an added social responsibility as well.

“I began to feel this overwhelming urge to show my boys how important it is to give back and help others, and show kindness. So, we practice one act of kindness each day and every evening, we go over what their ‘kind’ was for the day,” she says.

This includes volunteering at local homeless shelters and soup kitchens, and exposing them to people who are less fortunate and may be struggling.

Coming off a nearly year-long battle with postpartum depression, lifestyle and parenting blogger Megan Mazeika not only used her “off-the-chart” empathy levels to make some major lifestyle changes, she also launched a successful lifestyle blog, Beauty In The Raw.

“I started identifying with all mothers, even those in the animal world, so much so, that I changed my diet and became a vegan! When I thought about the baby calves being ripped away from their mothers, I became a strong advocate to protect the innocence of their mother’s love, which is 100 percent no different from my own.”

In a nutshell, after kids her newfound empathy didn't end with little humans, but stretched well beyond.

More Like This
Does Pumped Breast Milk Have Antibodies? Experts Weigh In
Why Does My Baby Cough While Breastfeeding? Experts Explain
Sex And Mom Guilt: When I Date Someone New, Am I Cheating On My Kids?
Gathre’s Winnie The Pooh Collection Is Finally Here