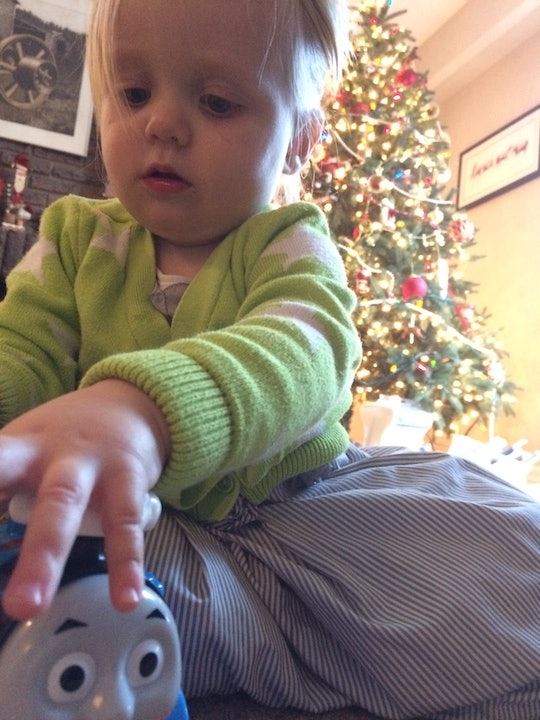 Three Christmases ago, as my barely there five-month bump and I sunned ourselves by the pool while on vacation in Costa Rica, I took plenty for granted. I took for granted the flutters that I was just starting to feel. And I took for granted the assumption that in a few more months I would give birth to a healthy baby who would latch to my breast without issue, eventually toddle and babble, walk and talk. By April of the next year, a month and half before my due date, I stopped taking things for granted. When you're faced with the prospect of a medical complication in your unborn child, your hopes turn to confetti. This year, as moms and dads get to painting reindeer tracks in yards and leaving traces of Santa Clause in the cookie dish, the real magic, for me, comes from my now-toddler. Last year, she did something that made me believe in Christmas miracles. Gather round with a hot cup of spiced cider, because this will put on quite a glow.

My daughter was diagnosed with complete Agenesis of the Corpus Callosum (c-ACC), a structural abnormality where the corpus callosum, a bundle of nerve fibers that allow the left and right hemispheres to communicate with each other, never formed in her brain. ACC is a tricky condition because it’s difficult to predict how a person will be affected by it.

Some people are born with severe cognitive or developmental delays while some grow up without any more issues than a neuro-typical child. We were told she may be born with a failure to thrive and she may have difficulty breathing on her own. She may have severe cognitive and developmental delays; she may be unable to feed herself or graduate from diapers. She may have seizures severe enough to cause regression or cognitive damage. She may be visually impaired. She may never walk. She may never talk. Her ACC along with her three other conditions: colpocephaly, an underdevelopment of the back of the brain, a neuronal migration disorder, and septo-optic dysplasia, an underdevelopment of the optic nerve, meant that all those things we take for granted as parents might never happen to me.

For the remainder of my pregnancy, I worried and cried, bargained and blamed myself, and prepared. I prepared for the chance — the very good chance based on the terrifying Google research I’d done — that I would have to mourn all those firsts my daughter might have had.

By last Christmas, however, I was no longer in mourning. The miraculous had happened. My daughter, born in May 2015, had never had a single issue related to her ACC or other conditions. She hit every developmental milestone on time or early. She showed no signs of cognitive delay. We celebrated every one of her firsts — her first roll-over, her first unassisted sit, her first crawl, her first step — for the gifts we knew them to be. We took nothing for granted. But there was still one first that I coveted. One gift that was yet to be bestowed upon me.

Well-meaning people told me I’d regret the day she learned to say mommy. Because once she knew how, she’d never stop. But those people took for granted that they’d hear the word at all. And that was something I wasn’t willing to do ever again. I had devoted many hours, daydreaming about what her voice might sound like the first time she said mommy. I considered that she might say mama instead. I thought about what the word might sound like after she’d scraped her knee versus when it’s cried out in the middle of the night. I’d lived with the fear that I would never watch her perfect mouth form that word and I knew that she could say it a thousand times a day and I wouldn’t ever tire of hearing it.

But it was Christmas and she’d still never once called me mommy. It wasn’t an issue with the ‘m’ sound, since mine and milkies made frequent appearances in her vocabulary. It became somewhat of a household joke — and by joke I mean my husband would laugh while I died a little on the inside. We’d point to him and ask, “Who’s that?” Daddy she’d tell us proudly. We’d point to me and ask, “And who’s this?”Daddy, she’d say with a grin that looked too much like her father’s for my own good.

By Christmas Day last year, I’d resigned myself to the fact that my daughter was simply not interested in calling me mommy. She seemed uninterested in calling me anything, really. But what was one word when my daughter was healthy? What was one word when her life — and ours — could have been so very different? Mommy was a small price to pay. But still, secretly, I wanted to hear it so very badly.

My Christmas miracle happened at my parents home. We sat in a circle in the living room, my husband, our daughter, my parents, aunts and uncles. We watched her play with her gifts and we all agreed she was the cutest Christmas baby there ever was. We laughed with each other as the smell of turkey and stuffing filled my childhood home when out of the blue, for no discernible reason, my daughter turned to me, she pointed her chubby finger at me and looked me straight in the eye. And without hesitation or prompting, like she’d been saying it since the day she was born, like she’d already inspected the weight of the word and knew it was of the finest carat, my daughter gave me the best Christmas gift I've ever received: Mommy, she said.