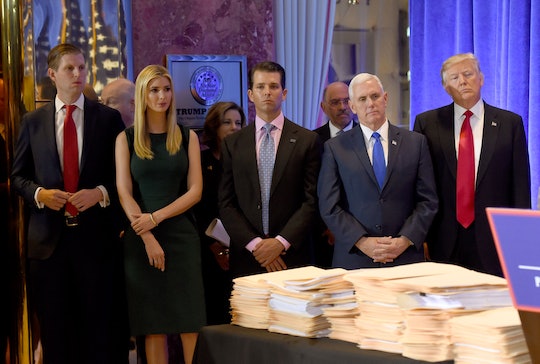 What Was Really Inside Trump's Stack Of Folders

Donald Trump's first press conference as president-elect could have been seen as a one-man comedy show. During the press conference, Trump put on quite the performance — and he even had props. Stacks of mysterious file folders filled with paper sat on a table — untouched and unmentioned — during the entire conference. It was later revealed that the folders reportedly held plans to "disentangle" Trump from his businesses, though no one was allowed to look inside them. In lieu of whatever it was that was actually, really, truly inside those folders, here's a better list of things that could have been in Trump's stack of folders — because you know his plans to no longer be involved in his businesses for the next four years can't possibly be that massive, paper-wise.

If nothing else, the bizarre stack of folders was a pretty big waste of paper (especially since, as previously mentioned, they served no purpose throughout the entire duration of Trump's press conference). Even more strange, Trump reportedly wouldn't let the 250 reporters in attendance peek inside those folders, according to The Hill (even if they swore they weren't CNN).

Instead, Trump waved off the mystery and told reporters that the folders contained "some of the many documents" he signed turning over "complete and total control" of his companies to his sons. But again, since reporters never got their hands on those folders, they arguably could have contained anything.

So let's run with it. Here's what I imagine was inside those mystery folders instead of boring legal jargon and smudged ink:

Sad! Do you really think Trump comes up with those wonderful tweets off the top of his head? Trump probably has tweets prepped weeks in advance — and that's probably good, because he'll definitely need to stock up if he plans to continue tweeting over the next four years. Losers.

A Map Showing Where Mexico Is

How else will he know where to put the wall?

Because sometimes everyone needs a refresher on the legislative branch (that's Congress... right?), the executive branch (duh), and the... uh, hang on. Hang on. It's on the tip of my tongue.

A List Of Tanning Salons In The Washington D.C. Area

After changing his residency from New York City to D.C., Trump will have to become acquainted with local tanning salons pretty quickly if he wants to maintain his beautiful tan.

Alec Baldwin does a killer impression of Trump on Saturday Night Live. But Trump has made it clear, through his Twitter, that he does not agree with that statement and DOES NOT LIKE Baldwin's impression. GOT IT?

Photos Of His Children, Their Names & Jobs

It can be hard for anyone to keep track of what business each child is running and whether or not they will (or should) be working in the White House.

So maybe Trump does have a soft side, and maybe those folders are filled with love letters to his wife, who he will likely miss dearly once he moves in to the White House. After all, the future first lady will not be living in the White House permanently until the couple's young son Barron Trump finishes out his school year, according to CNN.

Or, you know. Maybe he just copied and pasted some neat haikus or something.

Wouldn't that be fun?

His Theories On Who Framed Steven Avery

He has some ideas, but it WASN'T BOBBY, OK?

Lists Of Questions For President Obama

Important questions, such as "How do you get inside the building" and "Where did Joe Biden hide the remote?"

No, I mean, the Democrat.