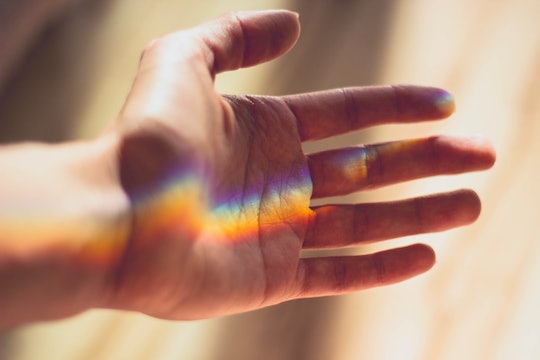 Things You May Not Know About Rainbow Babies

The very thought of a newborn baby can conjure up feelings of hope, joy, and intense love. For some parents, though, past experiences with child loss make the arrival of a new infant bittersweet. The things you may not know about rainbow babies can help you see the world of parenting from a different perspective. Balancing new grief against the joy of childbirth may be the most complicated calculation any parent can face.

Although the initial idea is simple enough, really understanding the truth behind rainbow babies may take some time. But on the surface level at least, a rainbow baby is a child born soon after the loss of a prior baby to miscarriage or stillbirth, according to The Bump. They are named after the concept that a rainbow follows a storm.

At first, it may seem like rainbow babies are something of a miracle, and parents who have these children must feel bathed in joy. In reality, though, rainbow babies often bring up complicated feelings in their parents. For some mothers, this may show up as expressions of intense anxiety during the rainbow baby's gestation and birth. As beautifully explained on The Huffington Post, a mom-to-be might worry excessively about having another miscarriage, to the point of adopting extreme precaution with her behavior. Even a hot bath may feel like too much of a risk. The fear can become debilitating.

Additionally, many parents may not get the chance to fully grieve after the loss of a miscarriage or stillborn child. According to Postpartum Progress, parents grieving the loss of a child through miscarriage may cope with feelings of despair, isolation, and even identity shifting. However, they might not openly express these feelings. Because a culture of silence still surrounds most discussion of miscarriage, persons dealing with this loss might not share it with any close confidants. The same shroud of silence accompanies the experience of stillbirth as well, as explained by the BBC. At a time when parents are likely at their most vulnerable and in need of support, they often find any discussion of their grief somewhat taboo.

When the birth of another child follows closely on the heels of this fresh grief, parents of rainbow children may have complicated feelings about their new roles. Sadness and even guilt (however misplaced) may attend the arrival of this healthy child. What would their family be like had the rainbow child's sibling lived? The new parents want to experience the full joy of their baby's arrival, but they may doubt whether the storm has really passed.

As far as this culture of silence is concerned, its most damning aspect may be the large number of people it effects. A miscarriage, which is defined as the loss of a fetus prior to the 20th week of gestation, occurs in 15 to 20 percent of known pregnancies, as explained by the U.S. National Library of Medicine. A stillbirth, in which the baby is lost after 20 weeks of gestation, affects 1 percent of pregnancies in the United States, according to the Centers for Disease Control and Prevention. It's entirely possible that your friend or family member has a rainbow baby and you'd never even know it.

With this in mind, it's even more important to treat new parents with kindness and compassion. For some new moms, the happiest day of their lives may be undercut by the pain of prior loss. If you know a mom with a rainbow baby, consider reaching out and providing an outlet for her experiences. And if you're coping with the mixed feelings of joy and grief brought on by a rainbow baby, surround yourself with loved ones and don't hesitate to speak up about your feelings. There is no correct way to grieve, so addressing your feelings as they are — even if it involves speaking up about a taboo topic — is crucial.