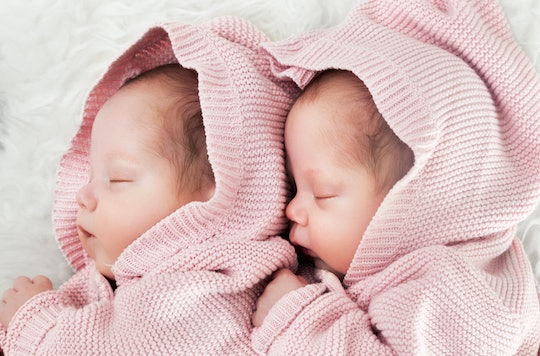 Think You Know How Twins Happen? Doubt It

When I was watching Roger Federer win Wimbledon again, it wasn't his athletic prowess that struck me. Nope, it was the camera cutting to his wife and kids. Two sets of identical twins! What are the odds? I mean, how do twins even happen? Moreover, how do two sets of twins happen in one family? Science is incredible, you guys, and it turns out that my required sex ed class in middle school didn't teach me all I need to know. I have a feeling sex ed failed you, too.

First of all, it's important to know that twins are either identical or fraternal. According to Women's Health, "Identical twins occur when a single fertilized egg splits into two." So the egg is fertilized by the sperm and then creates two zygotes, which later split and create two separate embryos. This means that the two embryos share the exact same genes and, as a result, will look almost exactly alike.

Fraternal twins, on the other hand and according to Women's Health, occur when two, separate eggs are fertilized by two, separate sperm. This means they don't share the same genes and often look no more alike than any other pair of siblings do.

Identical twins almost always happen by chance, while fraternal twins tend to run in families. So that means Roger Federer's two sets of identical twins are actually exceptionally rare. According to the American Pregnancy Association, identical multiples occur in 3 to 4 of every 1,000 live births. Whoa. Although, I bet that's probably better than a random person's odds of winning Wimbledon ever, let alone seven times.

According to a study published in the New England Journal of Medicine, "The number of multiple births of triplets or more due to fertility drugs like clomiphene citrate and injectable hormones rose from 36 percent to 45 percent from 1998 to 2011." So while it's not IVF itself, but certain drugs administered during IVF, in vitro fertilization can increase a woman's chances of having more than one baby at a time.

Twinstuff.com explains that the most common type of twin pregnancy is a pregnancy where both twins have their own amniotic sacs and their own placentas, making this type potentially the easiest of twin pregnancies to carry to term. This type of pregnancy, where neither twin is sharing a sac or placenta with the other (just sharing a little cozy nook for about 9 months!) usually results in the fewest complications, too.

Well, there you have it, you guys. Science is insane, the human body is incredible, and sex ed has probably failed us all. At least now we can all walk away knowing exactly how twins are made. Whoa.