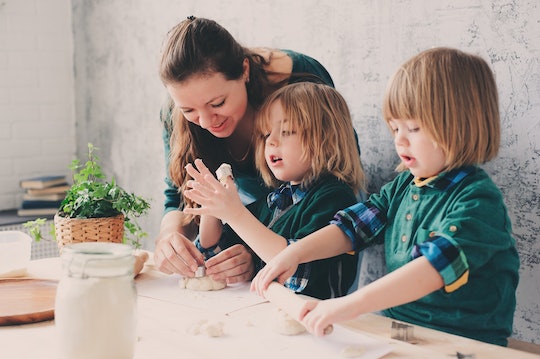 Your Kids Can Actually Help *Improve* Your Memory, According To Science

I don't think there's ever been a time in my life where I felt more scatterbrained and forgetful than after my twins were born, and given that I still haven't regained my full, pre-baby cognitive function five years later, I'm pretty certain that my semi-useless "mom brain" is officially here to stay. I know I'm not even sort of alone in that feeling though — every mom I've ever met seems to also feel dumber after giving birth — but could it be possible that parenthood actually improves your brain? As counterintuitive as it may feel, a recent study found thinking about your kids improves your memory, and it's pretty incredible.

Earlier this month, researchers at Binghamton University published a study in the Journal of Experimental Psychology: Learning, Memory, and Cognition, according to APA PsycNET, in which they looked at the different ways that evolutionary processes might affect human memory. Since evolution and natural selection prioritizes things like having babies and straight up survival above all else, the researchers anticipated finding that we likely better remember information and details related to our "evolutionary fitness," like raising children and finding a mate. To find out, researchers performed a series of tests meant to evaluate participants' recall abilities in different scenarios. And when the scenario involved thinking about raising children? Participants' recall actually improved.

The memory boost participants experienced during the parenting scenario was similar to the boost they also experienced during the "survival" scenario, which suggests, according to The Daily Mail, that our brains may work harder to remember important information when it's needed to protect our children. But parenting also seemed to have a particularly important effect on memory compared to other related evolutionary processes — even though finding a mate is pretty much as important to the survival of the species as raising children, for example, the study found that thinking about mate-seeking didn't actually improve participants' recall at all.

That might seem surprising, but Binghamton University distinguished professor of psychology Ralph Miller explained to Psych Central that there may be a pretty straightforward explanation. Our ability to memorize important information stems from our nervous systems, which are, according to Miller, "a product of evolution and past experiences," and are "influenced by natural selection that occurred amongst our ancestors long ago." And while mate selection is obviously important, it's possible that our prehistoric ancestors may just not have made the evolutionary link between mating and parenting (probably because of the nine-month wait in between).

In other words, our brains are primed to prioritize parenting even over other important evolutionary processes — and so much so, in fact, that memory and recall becomes sharper. So why is it then, that raising kids leaves so many of us feeling, well, kind of stupid? It probably comes down to a combination of factors. For one, parents (especially new parents) are often majorly sleep deprived, and studies have shown that lack of sleep takes a huge toll on attention, task performance, and working memory, according to Science Direct.

That's not all though — at least, for women. According to CBS News, hormonal changes in pregnancy and childbirth can actually permanently affect women's brain function, and may negatively impact memory and spatial relation skills. So while the good news may be that evolution has given parents a cognitive boost for the survival of the species, it might not exactly be enough to compensate for the fact that the everyday experience of being a mom can still make you feel like you've lost your marbles (and that's not even taking into account the effect that parenting-related stress or anxiety can have on our minds).

The study's findings may not be particularly helpful if you feel like having kids has made your brain go to mush, but it is still valuable to know that even when we might feel overwhelmed, evolution has given us a built-in advantage to ensure that we're able to do our job and protect our kids from harm. So while it might be super frustrating to be constantly forgetting where you put your keys, or the fact that you needed to pick up milk from the grocery store, chances are still pretty good that you'll remember the really important things that actually matter. And that's not a bad compromise.