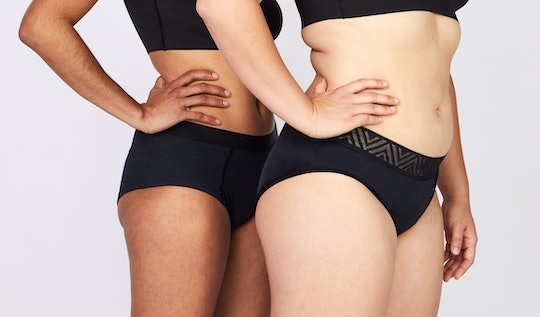 Getting your period sucks. There is nothing fun about several days of cramps and nausea followed by days of inconvenient bleeding. It's a fact of life for many, and until recently, you had precisely three choices for dealing with it if you're not keen on ruining all of your clothing: tampons, pads, and cups. While useful, they all can be a pain, and are somewhat unreliable as evidenced by the fact that every menstruating person has "period underwear." Especially those of us with a heavier flow. Thankfully, popular period panty innovator Thinx now has Thinx Super underwear for your crimson tide flow days.

Thinx Super holds up to four tampons worth of blood in one leakproof pair of underwear. For women with a heavier flow, this could mean the difference between being forced to change a tampon every hour or two, to possibly stretching it out to once or twice over the entire workday. It also means the ability to play sports, run errands, and live an otherwise normal life when normally having your period means planning your entire day around who has the best, cleanest bathrooms, and when you'll be able to get to them. Retailing for $39, Thinx super comes in sizes ranging from XXS to 3X.

They're machine washable and incredibly comfortable, made with a combination of nylon, elastane, with a primarily cotton gusset, in a variety of styles suitable for any outfit.

Maria Molland, CEO of Thinx Inc. said in a press release that “our mission is to empower every body through innovative solutions and social change, and Thinx Super delivers on that mission. We understand that every period is different, and we will continue to innovate to ensure that everyone can have a better experience on their period — from their lightest days to their heaviest days — with a sustainable solution that’s better for your period and better for the planet.”

This would've been a game changer to me in junior high and high school, when I was forced to carry my purse with me to the bathroom several times per day. At the time, I was in a wildly religious school where I experienced a lot of shame around my period, and having to go so frequently made me feel exposed and raw. Thankfully, attitudes about our periods are shifting, and people who menstruate aren't forced to endure this emotion with as much frequency, but for young people who might be more self-conscious about it, this is pretty awesome.

For people like me who have super heavy flow days, this just lightens the load of getting your period. Yes, four tampons seems like a lot, but to me, that's about eight hours of coverage. If I could just decrease the amount of time spent going back and forth to the bathroom during my commute or work day, that would be huge.

You know that feeling when you know your tampon or pad is leaking? Maybe you just sneezed, and it felt like a river of blood gushed forth like a dam breaking. Or perhaps you get a case of the hiccups, and every time your diaphragm contracts, you leak a little blood. Or maybe, just maybe, you're like me, and you know that you bleed so heavily that if you forget to put in a tampon, soon you will leave behind a trail that looks like you're a hunter dragging a freshly killed carcass through the woods.

Now imagine not having to fret about that. That's why Thinx made underwear for your crimson tide days. So you don't have to worry about it.