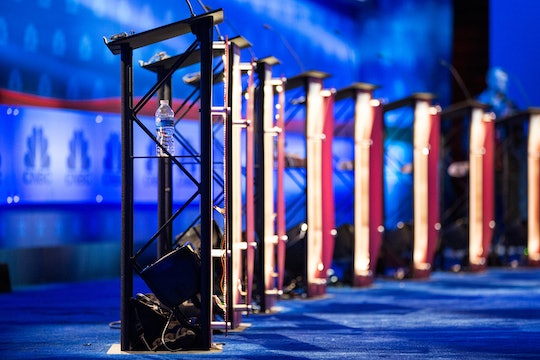 Third Party Candidates Who Made It Onto The Presidential Debate Stage

On Monday, presidential candidates Hillary Clinton and Donald "I Genuinely Cannot Believe He's The GOP Nominee" Trump will take to the stage in New York for their first presidential debate. With just 47 days to go until the general election, the debates — of which Monday's will be the first of three — are a crucial part of the campaign season. Libertarian candidate Gary "What Is Aleppo?" Johnson and the Green Party's Jill Stein have not been invited to the debate. There's been a lot of talk this election season about the woes of a two party system, so you'd think either Johnson or Stein would have been invited to the debate. In fact, it's a rarity. There have only ever been two third party candidates who've made it to the presidential debate stage: businessman Ross Perot in 1992 and Illinois Rep. John B. Anderson in 1980.

More Like This
This Is Everything You Need To Throw An Amazing CoComelon Party
All The 8th Grade Graduation Ideas You Need, From Gifts To Cards & More
Meghan Markle Reportedly Doesn't Want "A Big Baby Shower" As Her Due Date Nears
Meghan Markle & Prince Harry Donated Cute Beanies For Archie’s 2nd Birthday

Anderson was certainly a Washington insider, with a long political career behind him. When it was clear Ronald Reagan was the GOP frontrunner, Anderson split from the Republican Party, running as an Independent with the National Unity Party. Anderson managed to make the 15 percent ballot threshold to be invited to the first presidential debate, along with Reagan and Democrat candidate and former President Jimmy Carter.

While Anderson being invited to the first presidential debate in 1980 certainly made news, it was quickly overshadowed by a far more shocking announcement: The incumbent Democrat, President Carter, refused to participate in the debate if Anderson showed up — and that's exactly what happened. The first presidential debate was solely between Reagan and Johnson, and was dubbed the "Great Debate Debate" by media at the time. Obviously, the move didn't work so well for Carter — or Anderson, either, as Reagan would be elected the 40th President of the United States.

Fast forward to 1992. Now, the 1992 election didn't look so different from what it looks like today: A Clinton was trying to become president while a prominent businessman with no political experience ran against him in a largely self-funded campaign. No, I'm not talking about Trump, but rather Texan tycoon Ross Perot. Unfortunately for Perot, his political legacy didn't go far, as he became probably one of Saturday Night Live comedian Dana Carvey's best impressions.

Perot ran as an Independent against then-Gov. Bill Clinton from Arkansas for the Democrats, and the GOP's incumbent President George H. W. Bush. What makes Perot such a fascinating candidate is that he actually dropped out of the presidential race mid-July of that year, and then reentered the race on Oct. 1. Perot then went on to participate in all three presidential debates with Bush and Clinton.

And about that similarity between Perot and Trump? The two shared a lot of the same opinions about Mexicans — granted, Perot didn't call them rapists and criminals like Trump did, but he warned Americans that Mexico was on the verge of taking all our jobs:

While I'm glad that the first presidential debate between Trump and Clinton won't resemble the Republican clown car that was the primary debate stages, there's an undercurrent of anti-establishment sentiment among many voters that shouldn't be ignored. It would be worthwhile for voters to hear what other ideas are out there for our country from two-party outsiders like Johnson and Stein — but until they're given airtime at the debates, most Americans won't even hear of either one of them before election day.