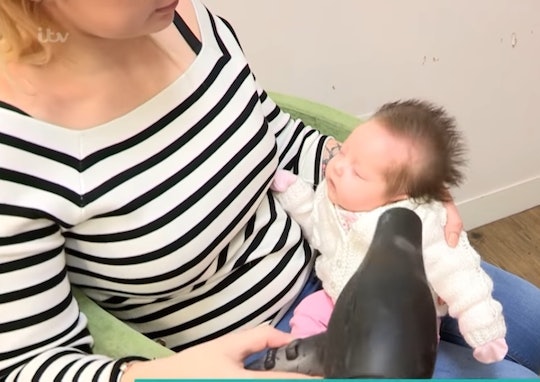 This Baby's 2-Hour Hair Routine Is Beyond Cute

Before you pick up that can of dry shampoo and throw your hair into a messy bun, watch this 10-week-old baby’s two-hour luxurious hair routine because it’s the cutest source of beauty inspiration you’ll see all day. In an interview with the British daytime television program This Morning, U.K. mom Kayleigh Marsh explained that she needs almost two hours every day, from start to finish, to style her adorable daughter’s full head of thick hair and baby Amelia seems to love every second of the pampering.

Between the oil treatment, to the wash, and then the blow dry, the very patient mom explained during the segment of This Morning, which aired on March 1, that this elaborate regime is necessary to “soften” baby Amelia's luscious locks. Marsh broke it down: She doesn’t actually “sit there for two and a half hours doing her hair,” but she puts “the baby oil in, leave it for two hours, and then I come back to it.” The timely process makes it easier for Marsh to brush through and manage her baby’s hair because "it’s so thick" and it helps with help with cradle cap, which is basically a baby version of dandruff as Cosmopolitan pointed out.

Watching the whole process will certainly make you green with envy, but what will make you crumble with cuteness is baby Amelia’s totally relaxed state of mind while her mom blow drys her hair. “She loves it,” Marsh told This Morning hosts Phillip Schofield and Holly Willoughby, adding that the white noise immediately soothes her.

Watch the video below and see the cuteness for yourself:

The mom of two seems like she has this routine down to a science, but as Marsh explained in the video, Amelia's thick hair is a new experience for her. When Schofield asked what her thoughts were initially when Amelia was born with a full head of hair, Marsh said she was shocked because her older daughter was born completely bald.

As the two girls' volume of hair were so different from each other when they first born, Willoughby asked Marsh if she experienced heartburn during her pregnancy with Amelia, which she did, because there is a known link between the two factors, according to a 2006 John Hopkins study.

It looks like this old wives' tale proved to be true for baby Amelia and it's led to the cutest thing you'll see all day.