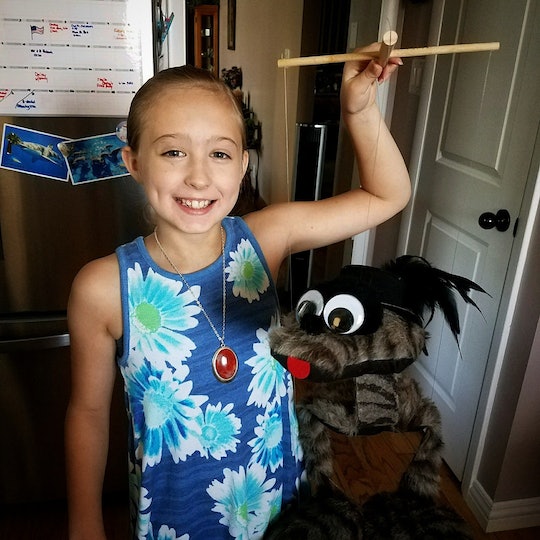 While Breast Cancer Awareness Month is cause for reverence and reflection on lives lost, it's also a time to celebrate the triumph of those who've conquered the disease, and lend a listening ear to their stories. One inspiring survivor, for instance, is this 10-year-old who beat breast cancer, and her resilience and strength is touching everyone. Two years post-mastectomy, as People reported on Tuesday, Chrissy Turner is staying positive and hopeful, despite being one of the youngest people ever diagnosed with the disease.

Chatting with People this week, Chrissy's mother Annette (a cervical cancer survivor herself), shared that her daughter "carries a glowing spirit with her wherever she goes,” and gives that gift generously to the world.

“She’s teaching others — especially women diagnosed with breast cancer — to embrace life and focus on the good. If anything, that’s been her most powerful message: ‘You can defeat this and you can keep living,'" she told the magazine.

Chrissy, who's currently a fifth grader in Centerville, Ohio, revealed the impact that her cancer has had on her overall perspective, telling People:

This experience has taught me to keep moving forward and never give up. Through my cancer, I learned how important family really is and that we should enjoy every second of this life. I love spending time with my family and friends and just having fun.

When Chrissy was only 8 years old, she underwent a mastectomy after finding a painful lump under her right nipple. Her father, who's also a Non-Hodgkin lymphoma survivor, remembers the moment of Chrissy's diagnosis as utterly "devastating," he said in 2016, according to Wetpaint.

But, Chrissy's positivity and strength to fight this disease never wavered, touching those around her. "To see what she is doing, and the gift she has given to other people, the hope she offers by speaking and sharing a little sunshine with everybody," her mother told local station KUTV one year after her diagnosis.

Chrissy's specific type of breast cancer —called secretory breast carcinoma — affects only one in a million, so her family was especially worried about potential outcomes, according to a People report from 2016. But thankfully, Chrissy reportedly went into remission after surgery, and undergoes consistent screenings to monitor her health.

"It has been difficult, but watching her and her courage has really struck me in a way. Watching her walk into the surgery room, not a tear," her sister Brianne told KUTV.

When the news was first announced of Chrissy's illness, one friend set up a GoFundMe page to gather donations for the Turner family, who've incurred extensive medical costs after both parents — and now Chrissy — have endured cancer treatment over the past seven-plus years. With nearly $95,000 raised of the $120,000 goal at present, donations and well-wishes continue to flow in.

In addition to the GoFundMe, a Facebook support page called Chrissy's Alliance has been established to share updates on Chrissy's journey. On July 23 of this year, a happy birthday post affirmed: "You make all of us want to fight harder and be better people," with the hashtag #Chrissystrong. And nearly 10,000 fans have rooted for her, day in and day out. As you can imagine, the birthday wishes abounded.

Chrissy's story sheds light on breast cancer's pervasive impact, which is unfortunately so widespread in the United States. Breast cancer affects about one in eight women, according to the Breastcancer.org. This year alone, in fact, 252,710 new cases are expected to emerge, the nonprofit reports. But, stories like Chrissy's offer support and positivity in an otherwise troubling time. And her work as a breast cancer activist continues to help others in unimaginable ways.

Though breast cancer isn't preventable per se, "[improvements] to screening and access to treatment for breast cancer are making a difference nationally," according to TIME. The American Cancer Society's most recent updates have shown that deaths due to breast cancer are trending downward, with an incredible 39 percent drop from 1989 to 2015.

Awareness, early treatment, and adequate health care improve chances for breast cancer sufferers. And with Chrissy's story out there, those who are fighting the disease can look to her for a source of inspiration.

As October is Breast Cancer Awareness month, consider donating to the organizations working to make breast cancer a thing of the past.