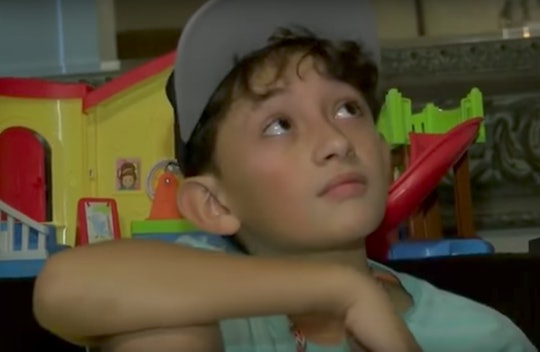 Big brothers often just know it's their duty to protect and guide their little brothers throughout life. And, as it turns out, some big brothers get started a little earlier than others. Earlier this month, for instance, two brothers in Louisiana introduced this dynamic into their relationship right away, when this 10-year-old delivered his baby brother in what will forever be known in their home as the ultimate big brother move. And as if that wasn't already pretty remarkable, this boy's poise and quick thinking actually saved the life of both the baby and his mom when she went into early labor at home.

It all started when Ashley Moreau woke up, headed to the bathroom, and unexpectedly went into labor more than a month ahead of her due date on Aug. 11. Her fiancé had just headed out to work, but there was no time to waste: The baby had already begun to emerge feet-first, meaning that he was in the dangerous breech position and, Moreau knew, likely unable to breathe, local NBC affiliate KPLC reported. Alerted to the situation, Jayden Fontenot, the heroic 10-year-old, went next door to his grandmother's house for help. She called 911, but was recovering from a recent back surgery and couldn't help.

So, back at his own house with his frantic mom, Jayden was on his own. And his handling of what was undoubtedly a scary and confusing situation earns him 10,000 Big Brother of the Year awards, as far as I'm concerned.

Now fully recovered, Moreau told KPLC how it all played out:

When he got to the bathroom, he just took a deep breath and said, "OK, Mom, just tell me what I need to do." He didn't look scared, he looked calm and brave and I said, "OK, I'm going to tell you what to do and we need to get your brother out as fast as possible... I was crying, but I just tried to stay calm and collected. Jayden was so calm that it made me more calm.

Still, Moreau said, she could see that her older son was scared. But by rotating the baby as his mom told him to, he was able to deliver the baby. "I wasn’t even thinking, I was amazed,” he later told KPLC. "I had to pull him by the legs — not hard, gently."

But right after he did that, another roadblock could have turned the situation tragic: Daxx, as the baby has been named, wasn't breathing. So Jayden rushed into the kitchen to grab a nasal aspirator used for his 11-month-old sister, Remi. That made it possible for mother and son to clear Daxx's airways, and now the baby is doing just fine.

The emergency responders arrived not long after that and took over the job from Jayden's (capable) hands. It seems as though the kid did much of the heavy lifting, though. Doctors later said that, if Jayden had not been there to help his mom deliver and to fetch the nasal aspirator, the baby likely would have died due to lack of oxygen. Also, Moreau was bleeding profusely during the delivery, possibly because her placenta had detached from her uterus, according to TODAY — so she could have bled out without her son's help.

Honestly, this is a brother story for the ages. Jayden will have lots of other opportunities to teach little Daxx all sorts of life lessons, but this first brotherly act will be hard to top.