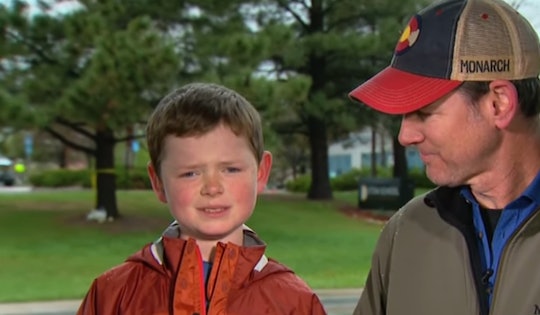 School shootings have happened with such frequency in recent years, that most of us are probably desensitized to the news headlines by now. But that doesn't change the reality of the situation: Children are dying at school at the hands of people with guns. And the "lucky" ones who aren't murdered go forward with the trauma of that horrific experience for the rest of their lives. And this 12-year-old boy's school shooting story is heartbreaking to watch.

The horrifying reality is this: So far in 2019, there have already been 15 school shootings, according to HuffPost. The most recent happened on Tuesday, May 7, when gunshots were fired at STEM School Highlands Ranch near Denver, Colorado. There, nine students were shot, and two students were being held as suspects, The New York Times reported. One of the nine victims — an 18-year-old named Kendrick Castillo, according to CNN — died later that night. “We know two individuals walked into the STEM school, got deep inside the school and engaged students in two separate locations,” Sheriff Tony Spurlock of Douglas County said at a news conference, according to The New York Times.

Sixth-grader Nate Holley — alongside his father Steve Holley — spoke with CNN's Brooke Baldwin on Wednesday afternoon about the shooting in Highlands Ranch. "It was incredibly scary during it, and at least half the kids in my class broke into tears when it started happening," the 12-year-old told the network.

The sixth-grader went on to explain that when gunshots were first heard and an alarm went off, his teacher initially had students hide behind her desk. But when the shooter got closer and began shooting at their classroom door, she had everyone move into a closet. Nate continued:

Much like the CNN anchor in the video, Twitter was utterly horrified by this young boy's account of the recent school shooting. One person wrote, "We are allowing our kids to grow up thinking that it's up to them to defend themselves. We are failing them and this is the disgrace of our generation."

Another twitter user commented, "I’m on the verge of tears. I admire his bravery, but he shouldn’t even be in a situation that would require that kinda bravery from a 12 yo."

It breaks my heart that my second-grader — and his younger sister next year in kindergarten — are growing up during a time when lockdown drills are the norm. It terrifies me, too, to put myself in the position of this sixth-grader's father — who had no idea whether his son was safe following the attack. No parent should have to go through that kind of horrific waiting game. And no child should feel unsafe at school. But more importantly, no child should be forced to contemplate "going down fighting" with a baseball bat as shots are being fired at his classroom door.