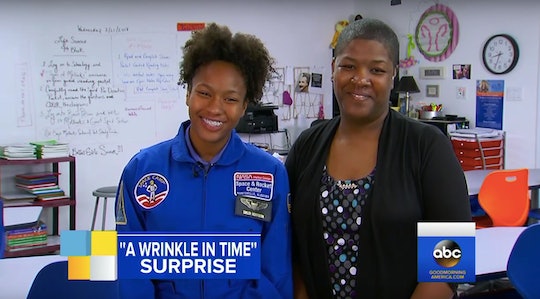 This 14-Year-Old's Fundraiser To Send 1,000 Girls To See 'A Wrinkle In Time' Is So Inspiring

Once everyone has seen Black Panther five or six times, the next big theater experience is going to be Ava DuVernay's A Wrinkle In Time, starring Oprah Winfrey, Mindy Kaling, and Storm Reid. With its female-driven cast, it's basically imperative that every little kid gets to see it. That's why 14-year-old Taylor Richardson starting a fundraiser to send 1,000 girls to see A Wrinkle In Time is so on point.

Much like celebs such as Octavia Spencer bought out theaters to make sure that every Black kid got a chance to see Black Panther, Richardson started her fundraiser because "representation matters," as she told Good Morning, America on Wednesday. This is not Richardson's first shot at crowdfunding for things that matter to her. According to Glamour, she raised enough money at 9 years old to send herself to space camp, since she wants to be an astronaut. She also raised over $18,000 and hosted screenings for girls to see Hidden Figures last year, after she saw the movie at the Hidden Figures White House event.

This time she "wanted all girls, especially girls of color, to know they can be whatever they want to be when they grow up and also can struggle and have flaws and still be successful in life," according to her interview on GMA. And she's already achieved that goal.

On her GoFundMe page, Richardson initially wanted to raise $15,000 to buy 100 tickets to a private screening and give them each a copy of the book, but at the time of writing, she already raised over $21,000. According to ABC News, she'll use any leftover money to put toward the Astronaut StarBright Space Camp scholarship.

She explained on her fundraising page that she wanted to send young girls to see the film for three reasons:

[It] shows young, black girls deserving a chance to be a part of the scifi cultural canon; it has a female protagonist in a science fiction film. A brown girl front and center who looks like me in the role of Meg, a girl traveling to different planets and encountering beings and situations that I’d never seen a girl of color in; Most impressive and importantly, it’s a fantasy film that is not about some white boys fighting evil, but about a black girl overcoming it.

Those are all very good reasons to make sure no one feels left out when the movie hits theaters.

Her mother, as you can imagine, is in awe of her daughter's ability to really make a difference in peoples's lives. Latonja Richardson, 43, called her daughter's campaign, "mind-blowing," according to ABC News. She added that her daughter "has so much drive and determination and, on top of it, she’s a really great kid. She takes time to pay it forward not just to girls that look like her but all kinds of kids all around the world, it's mind-blowing."

It's one thing when a celebrity buys out a theater for tons of kids to see movies that will empower them. It's awesome — but it's not like it takes a whole lot of extra work. But for a 14-year-old to be on her third crowdfunding campaign to do the same is inspiring.

Not only does she have to set the whole event up logistically, she also has to raise enough awareness to make people donate to the cause. Which means forcing people to think about how important it is for young women of color to see themselves represented on the big screen, which is not an easy task in an of itself. It's because of teens like Richardson that little kids will get to soak up A Wrinkle In Time when it comes out March 9 and be reminded that women, and especially women of color, are heroes, too.