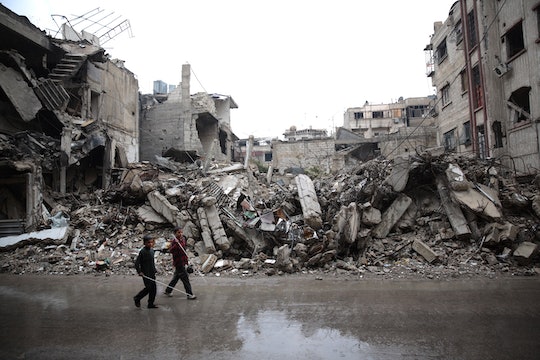 This 1938 Poll About Jewish Refugees Couldn't Be More Relevant

In the wake of last week’s terrorist attack in Paris, many Republican lawmakers have flat-out refused to support President Obama’s plan to aid 100,000 Syrian refugees. More than half of the nation’s governors are trying to block refugees fleeing combat in Syria by denying resettlement aid or other state resources. And in debates on television and social media, people are arguing whether refugees pose a terrorist threat, or if turning away refugees is in line with our nation’s values and history. So, when a 1938 poll about Jewish refugees resurfaced this week, the timing couldn’t have been more perfect. Now isn’t the first time Americans have debated whether to welcome thousands of people fleeing violence in their own country, and we should remember the heartbreaking consequences of turning away refugees.

The poll, posted online by the Harvard Crimson, was reportedly the first one taken of undergraduates in the Student Opinion Surveys of America. In 1938, undergraduates were asked “Should the United States offer a haven in this country for Jewish refugees from Central Europe?” and more than 68 percent said no.

Of course, context is always important. As Ishaan Tharoor pointed out in his recent Washington Post analysis, the US was just beginning to pull itself out of the Great Depression in 1938, so there would have been a fear that welcoming immigrant workers would also bring competition for scarce economic opportunities and resources. Also, the poll was taken before a wave of riots and radical anti-Jewish policies pushed Nazi activities in Germany into the international spotlight.

The good thing is that American sentiments eventually turned. By 1944, as evidence of the Holocaust and the mass murder of thousands reached more everyday people, U.S. officials began allowing the first Jewish refugees into the country. And more than 70 percent of Americans were in agreement and ready to welcome refugees fleeing the horrors of war and genocide in Europe. But by then, thousands of people had already fallen victim to the genocidal policies of the Third Reich.

When we ask whether refugees pose a terrorism risk, statistics point to an easy answer: they do not. The Migration Policy Institute points out that since 9/11, exactly three refugees were found to have links to terrorism. Three. And the reality is that the terrorist attacks in Paris are exactly the kind of violence that Syrians are running away from. But that hasn’t stopped conservative lawmakers from arguing quite loudly that terrorists posing as Syrian refugees could carry out an attack on American soil, even though the process for getting refugee status would make that a pretty inefficient route for a terrorist.

But if remembering the devastation of World War II isn’t enough of a reminder of the painful cost of turning away refugees, perhaps we should remember that protecting people fleeing religious persecution is… well, it’s kind of our thing.

Or at least, it used to be.