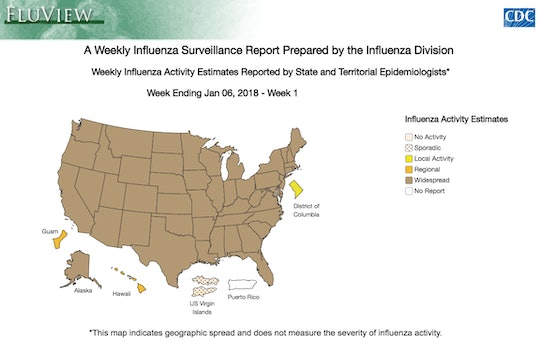 Centers for Disease Control and Prevention

My mom called me this morning and said that my dad was up in the middle of the night with a cough and headache. My immediate reaction? "It's the flu." Give me another season and another day, and I probably wouldn't have thought much about my dad's symptoms. But all of the talk about the flu has everyone a bit on edge about every sniffle and touch of nausea. Of course, this 2018 flu map from the Centers for Disease Control and Prevention (CDC) isn't exactly helping. After all, what it's telling us is that the flu is, well, nearly everywhere.

“One of the challenges this year is the flu shot is not as effective as we would’ve liked," Dr. Jann T. Caison-Sorey, associate medical director at Blue Cross Blue Shield of Michigan, tells Romper in an email interview. "There are a lot more flu cases then what we had anticipated. It’s because of the nature of the flu strain this year — people are getting sicker. People are also waiting a little longer to see the doctor than they should be with flu symptoms."

Caison-Sorey says those symptoms are what you would expect of the flu, "they’re just hitting harder this year and more people." Those symptoms include fever, muscle aches and pains, stuffy nose, cough, headaches, chills, fatigue, and the most deadly, pneumonia. "People who may have compromised immune symptoms or a preexisting chronic disease, such as lung disease or asthma, may be more at risk for severe symptoms," Caison-Sorey says.

Crucial to preventing the flu? "Good hand washing," she says.

In addition to keeping your hands clean, the CDC recommends adults and children alike take special precautions to guard against the flu, including avoiding close contact with sick people. Antiviral drugs — if your doctor prescribes them — and a yearly flu vaccine are also recommended. The CDC also noted everyone 6 months of age and older "should get a flu vaccine every year before flu activity begins in their community," typically by the end of October.

"Those who have not gotten the flu shot yet should still do so, as it prevented 71,000 flu-related hospitalizations during the 2015 to 2016 flu season," Caison-Sorey says, adding that flu shots are available through primary care physicians, local urgent care centers or retail health clinics.

Dr. Gary Kramer tells Romper that "this has probably been one of the busier years with the flu since the H1N1 swine flu epidemic." Kramer says he has been treating three to 10 kids a day for the flu, adding that he hasn't seen "an outbreak like this in eight years."

"Because there is no guarantee that merely taking the vaccine will guard you from the flu, many parents are hesitant," Kramer says, pointing to preliminary data in Australia that suggests less than 10 percent efficacy of the vaccine. "Unfortunately there is no reliable way to anticipate this. One school of thought is that most 'healthy' children can combat the flu without incident and hence the vaccine is not of great value given the uncertainty of its efficacy."

But Kramer explains that while the decision to vaccinate or not is certainly a personal choice, "we must all think about the public health impact of flu prevention that the vaccine has in reducing the spread to others."

Also important? Don't ignore symptoms or wait too long to get treated if you do suspect you or your little one has the flu. According to Dr. Nicole Edwards, CEO and medical director of Abundant Life Concierge Medicine in Columbia, South Carolina, antivirals need to be started within 48 to 72 hours to be effective.

"The flu can be deadly — it’s not just the congestion or sore throat or fever that is concerning," Edwards, who is also the medical director of True Counsel Behavioral Health, tells Romper in an email interview. "The flu can lead to other complications like pneumonia, sinus infection, and even respiratory failure, which can require intubation or lead to death.”

Oh, and let's not be heroes and show up to work when we feel like utter crap, mmk?

Because while I am not in the wrong to be a little bit freaked out about my dad's symptoms or my daughter sharing all the germs at her music class tomorrow, experts say with the right precautions — and action if you do recognize symptoms — we can kick this flu season's a*s.

More Like This
How Much Hair Loss Is Normal? 9 Signs You’re Losing Too Much Hair
6 Sex Positions To Reduce Leg Pain
The Difference Between The PICU & The NICU
Here’s Your Guide To Paced Bottle Feeding