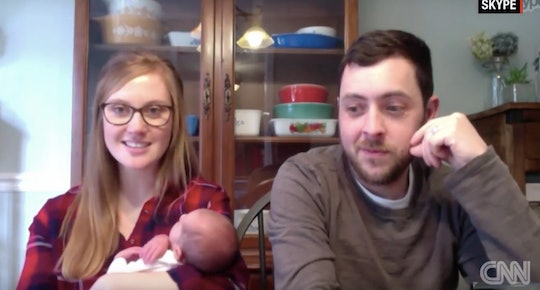 In vitro fertilization gives hope to couples facing infertility; in fact, this procedure enables thousands of couples each year to realize their dream of starting a family. But what happens to the extra frozen embryos, after the biological parents decide their family is complete? Thanks to the National Embryo Donation Center (NEDC), parents can choose to have embryos "adopted" by another couple for implantation. These "snow babies" can remain frozen for years, and sometimes even decades before being thawed for adoption. As a matter of fact, a 26-year-old woman has given birth to a baby from an embryo that was frozen for almost as long as she's been alive — proving just how awesome science really is.

On Tuesday, the NEDC announced that little Emma Wren was born on Nov. 25, People reported on Tuesday. Why is this so notable, you ask? Well, the baby girl originated from an embryo that was frozen back in 1992 — and remained frozen for a whopping 24 years — officially breaking the record for the longest-frozen embryo to successfully come to birth, according to the publication.

Even more mind-blowing? The new mom, a 26-year-old Tennessee woman named Tina Gibson was only 1 year old when her daughter was conceived. "Do you realize I'm only 25? This embryo and I could have been best friends," Gibson said at the time of the embryo transfer, according to CNN.

The embryo that ultimately became Emma was thawed earlier this year at the NEDC in Knoxville, Tennessee, as reported by The Mirror. According to the publication, the embryo had been cryopreserved on Oct. 14, 1992, and was thawed on March 13, 2017.

Little Emma was reportedly born weighing in at 6 pounds, 8 ounces and measuring 20 inches long. Previously, the longest-ever frozen embryo to come to birth had been frozen for 20 years, according to CNN. "I just wanted a baby," Gibson told CNN. "I don't care if it's a world record or not."

Twitter seems to be having a difficult time grasping the fact that an embryo frozen for more than two decades is now a baby.

"This baby was around for 9/11," one person pointed out. "Is anyone else just a little bit freaked out by this story? The child, who looks adorable (and congratulations to her family!!!) was kind born 24 years old!" (For the record, that's not exactly how it works.)

Yet another Twitter user lamented, "A frozen embryo was born after 24 years, but I put my ice cream in the fridge for a day and it gets freezer burn." LOL. Same.

This, hands down, is my favorite reaction out of them all. It seems Tina and Benjamin Gibson missed out on a lucrative opportunity when it comes to their newborn daughter's name. "A baby is born after being a frozen embryo for 24 years and they don't name her Elsa? Disney would have paid for EVERYTHING!!" a genius Twitter user wrote.

The National Embryo Donation Center — which was founded in 2003 — has enabled almost 700 pregnancies so far, according to The Mirror. “We hope this story is a clarion call to all couples who have embryos in long-term storage to consider this life-affirming option for their embryos," Dr. Jeffrey Keene (who carried out the embryo transfer for the Gibsons) told the publication.

While embryo adoption is certainly a compelling choice, it's just one of many options couples have for additional frozen embryos when they're done adding to their family. As CNN reported, they could instead leave them cryopreserved in liquid nitrogen storage tanks, dispose of them, donate them to research or training "for the advancement of the field of reproductive medicine."

Honestly, I'm also having a difficult timing wrapping my mind around the fact that an embryo was frozen for that long and actually survived until birth. This kid could have grown up during the Beanie Babies craze. Her favorite snack as a child could have been Dunkaroos washed down with a Squeezit. Instead, little Emma will never know a time when wifi and smartphones and iPads didn't exist. Mind = blown.