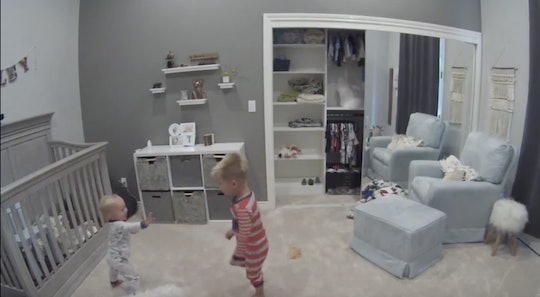 With as much they absorb from the world around them, toddlers are some seriously smart tiny humans. Don't believe for a second that all they do is watch is spend their days watching Daniel Tiger and begging for more time with the iPad. Nope, they're coming up with some incredibly crafty plans of their own. Like this 3-year-old, who helped his little brother escape his crib, and is definitely well on his way to taking over the world — or at least his parents' house.

High tech baby monitors with built in cameras are a great way to make sure your kid is sleeping soundly — but also serve as a pretty great surveillance system when your toddler stages a coup in his sibling's room. Case in point, baby monitor cameras recently captured 3-year-old Ollie tossing a kiddie chair into his brother's crib to help him escape from captivity, so that they could go play (because who needs sleep?).

In the video, Ollie is seen putting the child-sized chair in the crib and hoisting himself over the railing. Once there, Ollie shows his 1-year-old brother, Finn, how to utilize the makeshift stepping stool to climb out of the crib after him. The escape takes no more than two minutes and is an incredibly impressive feat, all things considered.

The results are hilarious and a little bit terrifying — if only because we now know exactly what the parents of these two boys who will have on their hands in the future. (If they're this crafty now, imagine how creative they'll be in sneaking out of the house as teenagers.)

Babies and toddlers escaping from their cribs is not uncommon — and while it is adorable and funny sometimes, it can also be a bit dangerous: A 2011 study published in the medical journal Pediatrics found that 26 children suffer from a crib-related injury every day.

Luckily, according to ABC News, the boys' parents (who document their lives on YouTube with their daily vlog, Daily Bumps) said they were in the home watching the escape unfold the entire time which means they were able to come to the boys' rescue if something bad had happened.

"Our reaction went from being transfixed with their adorableness, to panic, and then to relief," the boys' father, Bryan Lanning, told BuzzFeed News, of the video. "Pretty standard for modern day parents, I'd say."

There's no doubt these parents will have their hands full in the years to come. For now, at least the two boys' antics make for a good laugh. Right?