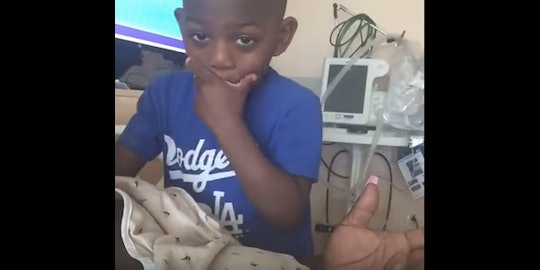 I recently heard someone say that only a mother can love a ­4-year-old, and as the mom of 4-year-old twins, that spoke directly to my soul. Four is a tough age for lots of reasons — they're more independent and better able to communicate, but they can also be super stubborn and frustratingly opinionated about pretty much everything. Yet, as one mom's YouTube video recently captured, sometimes 4-year-olds can also be the absolute best. This 4-year-old asking his pregnant mom to come home from the hospital is at once beautiful and heart-wrenching, and perfectly sums up why preschoolers are so special.

Back in June, California mom-of-six Glow Wilson was in the hospital awaiting the arrival of her youngest daughter, Dream. She'd already been in the hospital for three days, and was preparing to deliver by C-section a few days later, according to People, but that was clearly a plan her 4-year-old son, Bryce, was not happy about. During a visit with his mom at the hospital, Bryce decided that he was going to try to convince his mom to go home with him instead of having the baby, and his argument was pretty much one that only the pure heart of a preschooler could come up with.

In the clip, Bryce sat at his mother's hospital bed, and told her exactly why he feels she needs to come home immediately — baby, or no baby. Bryce said,

We need you. We need our mama. We need you ... We want you to stay alive, and we don't want nothing to happen to you.

Poor Bryce was clearly feeling pretty worried about his mother being in the hospital, so Wilson tried to explain to her son that the reason she was in the hospital was to make sure she'd be OK, and that she'd be able to come home once his little sister was born. Unfortunately, that response clearly wasn't what Bryce was hoping to hear.

After suggesting to his mom that the doctors take the baby out tomorrow, Wilson tells her son that, actually, she's not scheduled to come out until Sunday. And that's when Bryce gives his argument one more impassioned push:

By that point, Wilson sounded understandably choked up by her sweet son's speech, and as she explained to People, it was a pretty bittersweet moment for her. After all, while his love for her is obviously so touching, Wilson said it was hard to see how difficult her hospitalization was for him:

I cried while I was recording it, but I tried to stay as strong as possible because I wanted to convince him I was going to be okay. At the same time, I was really scared to see that it was touching him like that. Thinking about it right now makes me want to cry.

As hard as it is to see young kids struggle with a separation — like when mom is in the hospital to give birth — it's also totally common. And when that separation can be extended by bed rest or possibly a NICU stay, it can make things even more difficult. It may not be possible to completely prevent separation anxiety from occurring (after all, it makes total sense why it would children would struggle), but in a blog post on her site, Aha! Parenting, parenting expert Dr. Laura Markham said that there are strategies that can help make it a little bit easier.

Markham said that ensuring that you have a strong connection with your older child ahead of the separation is most important (something Wilson and her son clearly seem to have down), but that it helps to take into consideration other aspects, like making sure you leave your child with someone they feel comfortable with, and who will be able to help soothe them when they inevitably feel sad or scared. As for what to avoid, Markham explained that while the idea of "preparing" kids for a separation by leaving them with others often in advance might be well-intentioned, it can easily backfire:

The goal is not to help her get used to separation and being with random people, because that is not how attachment works. The goal is to help her build a relationship with your designated person, whoever it will be, so that person can calm her during your absence. The only thing that will help her cope with your absence is the presence of someone she trusts.

As hard as it can be for kids to be away from their moms when it's time for a sibling to arrive, it's usually something that turns out to be just fine — and that definitely seems to be the case for Bryce, whom Wilson said is pretty smitten with his new little sis. And though he may not have been very happy about being away from his mom, the video of his sweet speech will forever be a testament to the kind of love it seems like only a 4-year-old could have for their parents. Which, let's be honest, totally makes all the maddening moments of parenting a preschooler completely worth it.

More Like This
This Mom Gave Birth On Graduation Day, So The University Brought Her Degree To Her
What Is Monkeypox & Should You Be Worried? Here’s What You Need To Know
Mom Gave Birth On The Side Of The Road... With Her Five Other Kids In The Car
This Underwear-Clad Mom Saved Her Pet Goose From An Eagle While Breastfeeding