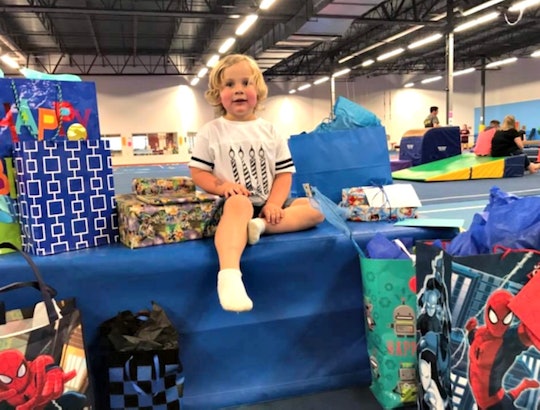 This 'Mrs. Doubtfire' Themed Birthday Party Is Too Good

Is it just us or do kids have the best parties these days? There's been poop-themes, Golden Girls themes, and now, one genius family threw their 4-year-old son a Mrs. Doubtfire themed party. Yes, like as in the 1993 movie starring Robin Williams. Little Evan Kowalski, from Michigan, was not going to have his birthday any other way. His mom Laura, told Entertainment Weekly that she had some other ideas for the party based on his hobbies, like bugs and soccer. But Evan wouldn't have it. Kowalski said:

More Like This
Here's What Your Kid Is Really Saying When They Tell You They Hate You
Tax Day Is Almost Here: Everything You Need To Know About The New Child Tax Credit
The Biggest Baby Name Trends Of 2021 So Far
If A Tick's Head Gets Stuck When You're Pulling It Out, Here's What To Do

I tried to talk him into doing just a soccer cake, like [Matthew Lawrence’s character has] in the beginning of the film, but that wasn’t good enough. So I had to figure out how to make it possible.

So she went all in. There were fruit kebobs with a sign that had the classic Mrs. Doubtfire line, "it was a run by fruiting" Goodie bags that had Mrs. Doubtfire's image on them that read, "thank you for coming, dear!" There was even a cake that depicted Mrs. Doubtfire herself, though Evan insisted that the she have pie all over her face, along with other items from the film, like dentures and a broom. They even thought of having someone come dressed up as the famous Scottish housekeeper, but they couldn't find the right person to dress up with the wig and broom.

The Decorations Were On Point

Check This Thing Out

The cake was just as delicious as it was intricate. It was made by Angie Claxon, the owner of Cakes By Sweetypants in Grosse Ile, Michigan. According to Claxon, the cake was made with rice cereal treats, fondant, and a Swiss meringue buttercream, It took two whole days to make the cake (though judging by the shop's Facebook page, she's used to super cool and detailed cakes).

The cake was the first thing to be ordered, though. When Laura sat down to start planning, she could find nothing at all on the internet about a Mrs. Doubtfire themed party. Because, well, Evan's might have been the first. "We were just kind of winging it," she told Today. As for how a 4-year-old knows about the glory of Mrs. Doubtfire, that's all his mom's doing, too. She said:

One of Evan's favorite things to do is watch movies, so we watch a lot of movies in the evening to wind down. He likes classics, like Home Alone or Matilda, so about six months ago, I showed him Mrs. Doubtfire. He loved it. Just loved it.

Obviously, Evan and his mom both have great taste. But now we want to know what his next birthday party will be. Dead Poets Society, maybe?