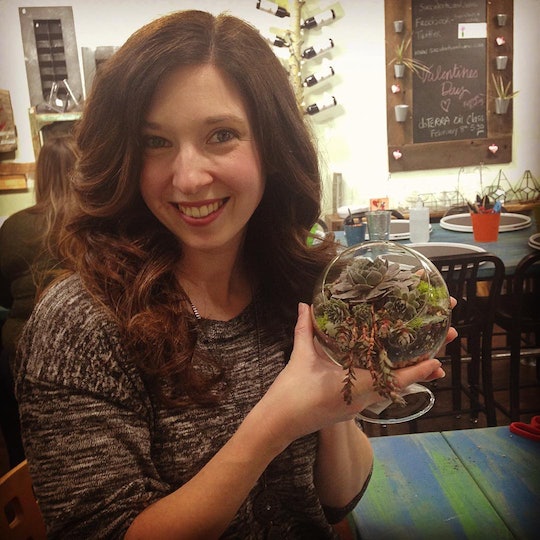 I never thought much about self-care before I became a mother, because to be honest, it came naturally. I had all the time I needed to shower and shave and do my hair and makeup. But as soon as I brought home my baby, everything changed. I would go days without showering. I never wanted to leave the house, because I couldn't find the time to do my hair or put on even a little bit of makeup. Most of the time, I couldn't find the energy to put on real pants.

More Like This
10 Hilarious Tweets That Perfectly Capture What Moms Are Going Through
Your Guide To Hiking During Pregnancy
These Last-Minute Mother's Day Gifts Show Serious Thought
Vaccinated People Can Ditch Masks. Where Does That Leave Kids?

Nonetheless, I always hated the feeling of being "undone." When I did have to venture outside, I wanted to look presentable. I wanted to look more like my old self and less like the bedraggled, stay-at-home mom I had become. Even after the demanding first few months of the postpartum period passed, I still convinced myself that I didn't have the time to do my makeup in the morning, even if it did make me feel more ready for the day.

But whenever I would get ready for the rare date night I would get with my husband, I realized it wasn't taking me very long to get ready. Despite taking the time to pick out a special outfit, trying to relay necessary babysitting info to my MIL, and putting on a full face of makeup, I was still able to be ready in 15 minutes or less. After the initial postpartum period, I discovered that I could actually do my pre-baby self-care routine in exactly 5 minutes, and it changed everything.

I have always been someone who likes to know where their time is going, and often would track my time if I felt like I was wasting it. I did this occasionally before having a baby, then after to figure out where all my time was going (answer: a billion new tasks from picking up other people's toys and clothes to wiping faces and butts). By doing this I realized how long it took me to do laundry (about 45 minutes of folding time on a double load day, no wonder I hate it so much) and how long I needed to take a shower (30 minutes with drying my hair). I wondered: how long did it really take me to do my makeup?

Sine I normally tracked my time in 15-30 minute increments, doing my makeup (if it showed up on my time logs) would always be alongside other things like getting dressed or making my bed. I decided to get out a stopwatch and actually figure it out. I didn't rush. I took my time. And I realized that my excuse that I had "no time" to do my makeup was total bull. It took 5 minutes, including distractions from my kids.

Now, full disclosure, I'm no makeup artist, so my "full face" isn't anything impressive. I don't contour (and don't intend to try) and I always wear the same makeup, only occasionally switching out a lip color. My routine consists of ten products and three brushes.

I like to start with washing my face, which tacks an extra two minutes on with moisturizing, and then use a brightening concealer, mostly for the dark circles under my eyes. After blending it in with my fingers, I put on some loose powder foundation and blush. I swipe on some chapstick and if I'm not doing a full face, I put some concealer on my eyelids with a quick brush of neutral eye shadow. That's my everyday makeup, and by the time I reach this step, I am a mere 1.5 minutes in.

If I'm going full face, I start with lips, putting on some lip liner and a long-wear lipstick (otherwise what's the point). I love using MAC's liquid matte ($21), I went a whole day at Disneyland wearing this and it was still on when I got back to the hotel that night. Next I do my eyes, putting on some Urban Decay primer ($20), which to be honest, I don't love as much as MAC's paint pots($22), but I will be damned if I pay for a makeup product and don't use it to the last drop. I put on a neutral eye shadow palette, use a charcoal liner, then do mascara. This part usually takes about 2.5 minutes, which usually includes an interruption by one of the kids. The extra minute is usually fixing the fact that I nearly always get a fleck of mascara on my eyelid and have to do damage control with makeup wipes and extra eye shadow.

But all said and done, 5 minutes is a time investment I can make even on the busiest days. OK, maybe that's a bit of an exaggeration. I did have a day this week when one of my kids got a nosebleed and ran through the house smearing blood on the walls and another spilled an entire bowl of cereal onto the floor. I did not get my makeup done that morning. But most of the time, those five minutes to do my makeup is well worth the confidence boost I get from feeling fully put together - and I'm so glad I've given up the false narrative of not having time.