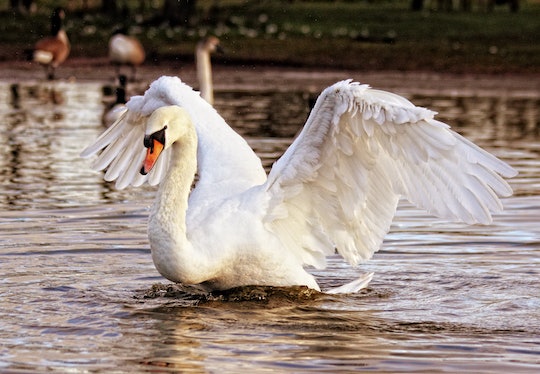 When I recently told my 4-year-old, Queen-Elsa-loving daughter that, actually, there is a real-life queen who lives in a giant palace in England, well, her mind was basically blown. Unfortunately, I then had to break it to her that, no, she likely couldn't celebrate her fifth birthday at "Queen Elizabeth's castle," and no, she also probably wouldn't ever be invited to go over for a slumber party. But when 5-year-old Lyndsay Simpson had her heart set on caring for one of Queen Elizabeth's swans for a few days, she didn't hesitate to go straight to the source for answers. Simpson asked the Queen for a pet swan (just to borrow) after her mother told her that Queen Elizabeth owns all the swans in Britain, and a few weeks later, Lyndsay actually got a letter in the mail from Buckingham Palace. Unfortunately, the palace wasn't writing back to offer her a swan, but the response from the Queen's rep was still pretty amazing.

Lyndsay's mother, Jennifer Bax, told The Times that her daughter had always been a big fan of swans, and naturally, dreamed of keeping one as a pet. But Bax told her daughter that it wasn't actually her decision whether she could have one, because in Britain, the Queen actually owns all the swans (a not-completely-inaccurate piece of U.K. trivia). But that explanation didn't satisfy Lyndsay, who opted instead to write to the monarch, asking if she may borrow one of her swans for a weekend, with the promise that she would keep it in her bathtub and take very good care of it.

Bax likely never expected anything to come from her daughter's letter, but a few weeks later, Buckingham Palace Deputy Correspondence Coordinator Jennie Vine wrote back to the young girl, thanking her for getting in touch, and letting her know that the Queen had "taken careful note careful note of [her] comments regarding the keeping of swans as pets," according to The Independent. And though Vine didn't consent to Lyndsey's plan to borrow a swan for the weekend, she did let the girl know that there was technically still hope: while it's true, according to USA Today, that a centuries-old British law ensures that the Queen has first dibs on owning any unclaimed mute swans in open waters in England and Wales, Vine clarified that Queen Elizabeth isn't actually the supreme owner of all British swans. She wrote,

I should perhaps explain that it is a common misconception that The Queen owns all the swans in the United Kingdom. Her Majesty owns mute swans and only exercises her right of ownership over swans on certain parts of the River Thames.

It should be remembered that as native wild birds, swans now enjoy statutory protection under the Wildlife and Countryside Act 1981.

The Queen was encouraged to know of your interest in our native birdlife and thought it kind of you to write as you did.

In other words, Lyndsey may want to think twice before keeping a swan as a pet in her family's bathtub, and, you know, maybe she'd be better off getting a hamster or something. But the letter definitely didn't seem to deter Lyndsay from her dream. When asked by The Times whether she thought it would be difficult to give the swan back at the end of the weekend, she said "I would just ask the Queen again if I could borrow it as I would have looked after it very well" (fair enough).

As for what she'd feed the Queen's swan while caring for it? Lyndsay had the world's most perfect five-year-old answer ever: “Whatever the Queen feeds her swans.” I mean, why would she possibly do anything else?