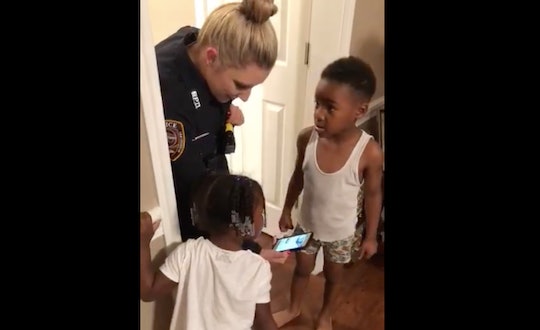 Christmas time may be around the corner, but that doesn't mean everyone is feeling the holiday spirit. In fact, some grumpy people may want to steal joy from everyone who celebrates Christmas. And those people may just happen to be green and furry, and have a sour grin on their face. OK, clearly I am talking about the Grinch, but with good reason: This 5-year-old boy called 911 on the Grinch because he wanted to save Christmas. Some people are just too precious for this world.

Here's how it went down: On Saturday night, TyLon Pittman, the most adorable 5-year-old kid to ever exist, called the police in Byram, Mississippi, because "he thought the Grinch was going to be coming to steal his Christmas," according to the Clarion Ledger. The dispatcher who took the call posted the exchange on her Facebook page, which caught the attention of Byram police officer Lauren Develle. Develle asked for his address and decided to visit TyLon's house late Saturday night to assure him that she will not let the Grinch steal his, or anyone's, Christmas, The Clarion Ledger reported.

TeDera Dwayne Graves, TyLon's brother, captured the entire heartwarming exchange on video, which the airman uploaded to Facebook. The now viral post has received nearly 28,000 shares and more than one million views.

Develle told reporters on Sunday that she used to watch the movie adaption of Dr. Seuss' How the Grinch Stole Christmas every year as a kid, according to The Clarion Ledger. She said she found TyLon's 911 call, and the whole general situation, "really funny" due in part to her family's connection to the Grinch.

She added, The Clarion Ledger reported,

Every Christmas morning, my dad wears these Grinch pants. It's his favorite movie. Growing up seeing the Grinch every Christmas was my favorite thing.

Develle also told reporters over the weekend that she has been compared to Cindy Lou Who, according to USA Today, which makes her visit to TyLon's home even better. If you've read or watched How the Grinch Stole Christmas, you'll remember that Cindy Lou is the little Who girl who befriended the Grinch and changed his cantankerous heart about Christmas.

And like Cindy Lou, Develle promises to keep Christmas in tact. The Byram police officer assured TyLon, who aspires to become a police officer, that she won't let the Grinch "come steal your Christmas," according to USA Today. TyLon said he was convinced of the Grinch's thieving ways because of a Facebook video. In fact, he watches all the videos about the Grinch, the 5-year-old kid told Develle, according to USA Today.

So what did TyLon want the cops to do if the Grinch tried to steal his Christmas? The adorable boy answered, according to Graves' video,

I want y'all to come back to my house and take him to jail.

In the video, Develle does assure TyLon that Byram police can come to his house if the Grinch came to take the holiday from his family. It's honestly the sweetest exchange I've ever witnessed because TyLon is so pure at heart. He really believed the Grinch would ruin his Christmas because "he steals everybody's Christmas," the preschooler told his mother, according to The Clarion Ledger. He loves the holiday season so much he was afraid of losing it.

TyLon's also a tough little cookie. He told reporters Sunday what he would do if he came face-to-face with the Grinch. The 5-year-old boy said,

I'm going to say put your hands behind your back and get down on the ground, then when he gets on the ground, I'm gonna say, 'Why are you stealing Christmas?'

I... I just don't know how to process all this cuteness.