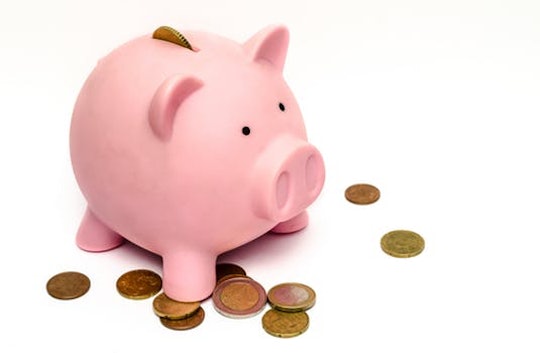 When adults see an injustice, it's all too easy to brush it off. There's nothing I can do about that, we might think. Or, if that's the way it's always been, I guess that's just the way it's always going to be. Kids, on the other hand aren't nearly so jaded and cynical. In fact, the littlest among us have some of the biggest hearts around. Take, for example, Sunshine Oelfke, who donated her piggy bank savings to pay for her classmates' milk. And the best part about it is that the kindergartner's selfless gift is one that keeps on giving, as she and her grandmother have teamed up to raise enough money so that every kid in her class has milk at snack time for the foreseeable future.

It all started earlier this month when Sunshine's grandma, Jackie Oelfke, noticed that Sunshine had emptied out the piggy bank she uses to save up to buy her own snowmobile onto the floor, according to CBS News. Soon, the 5-year-old had transferred some of the money into a plastic baggie and stashed it in her backpack. Her plan, it turned out, was to give the money to her friend who never got milk at school. Soon after, Sunshine and her grandmother met with Sunshine's teacher to give her the approximately $30 Sunshine had saved, the news outlet reported. That way, all of the kids in Sunshine's class could have milk every day — at a cost of $0.45 per carton — whether or not their families could afford it.

"Milk is important in our family, so it's very important for Sunshine's friends to have milk with her," Oelfke told CBS News. And, now, all the kids in Sunshine's class at Birchview Elementary School in Ishpeming, Michigan, probably will.

Before Sunshine's campaign to ensure everyone in her class could drink milk, about half of her 20 classmates were not getting milk. The grand monthly total for every kid to have milk comes to $180. And, lo and behold, a GoFundMe page that Oelfke set up with Sunshine has raised more than $7,000 and counting in just 11 days. On Sunday, Oelfke posted the following heartwarming update to the campaign:

At this point Sunshine has earned enough money for the entire class to have milk (if they choose) for second semester (mid Jan to first week in June) and also the month of October. We are now working on making sure November, December, and January are covered too!!! Thank you so much!!!

Clearly, the campaign has been so successful that Sunshine can choose to donate the money to even more kids to buy milk — and there's little doubt that she'll be enthusiastic about doing so.

In the days since their story has begun to garner national attention, Oelfke has posted regular Facebook updates, often videos starring Sunshine herself. In one the proud grandma shared that Sunshine has spent her life savings on the cause, but was excited as ever about it. Heres's what Oelfke wrote on Facebook:

Sunshine says GOOD MORNING FRIENDS!! Today Sunshine emptied the last of her snowmobile fund to take to school for milk money!! I got tears again when she said, “It’s all gone. That’s ok cuz I will get some more monies for it when I feed Lou” (Lou is our cat. Sunshine does chores to help earn money for her snowmobile fund.) #arcticcat

This whole situation just goes to show that the world would be a better place with a little more Sunshine in it. Kudos to her for noticing a problem, doing what she could to fix it, and helping so many of those around her to be better people in the process.