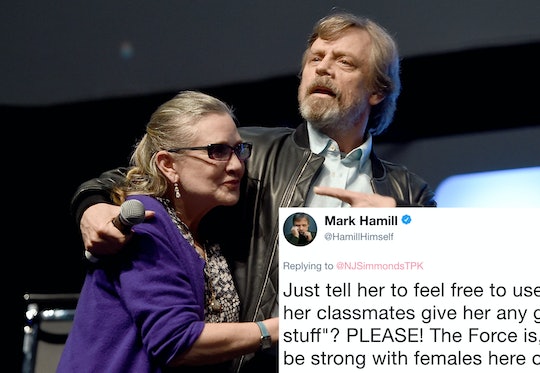 This Girl Was Nervous To Wear Her ‘Star Wars’ Shirt, & Then Mark Hamill Sent Her A Message

Who better to quell a young girl's Star Wars–related anxiety than a group of badass Star Wars-loving women — and Mark Hamill himself? N.J. Simmonds, an author and mother of a 7-year-old girl, recently took to Twitter seeking words of encouragement for her distressed daughter. The 7-year-old was afraid people would make fun of her for wearing a Star Wars shirt to school, because she thought Star Wars was "boy stuff."

"My 7 year old daughter's crying in bed right now because she wants to wear her Star Wars t-shirt to school but is scared her classmates will laugh because she likes 'boy stuff,'" Simmonds tweeted on Tuesday. "I'm so sad/angry for her. Please RT and comment so I can show her how awesome girl #StarWars fans are." The tweet quickly began to rise in likes, retweets, and responses, with thousands of women, girls, and one Luke Skywalker replying with kind messages of support.

"Just tell her to feel free to use this gesture if her classmates give her any grief," Mark Hamill tweeted, alongside a GIF of himself as Luke Skywalker brushing off his shoulder. "'Boy stuff?' PLEASE! The Force is, & always will be strong with females here on Earth & in galaxies far, far away."

Simmonds sent Romper the following statement via email about her daughter's response to Hamill's tweet:

When Mark Hamill responded I showed her and she smiled, she then said "of course he said nice things, because he's the good guy" and she ran off to play. Like any normal kid should.

In her statement, Simmonds further explained why her daughter was worried about wearing the shirt in the first place. Her statement reads:

We live abroad and are part of a small community, so my daughter's only reference to Star Wars was the fact that she likes to watch it with her dad and a few boys at school play Star Wars games in the playground. Therefore, when she decided to wear her T-shirt to school she was nervous about what her girl friends would say as she'd never seen her friends wear Star Wars clothes (as they are always in the boy section of shops).

Simmonds' tweet garnered so many heartwarming responses, including this one from a 17-year-old Star Wars fan.

Many others responded to the tweet, some of which explained how their love of Star Wars inspired them to take on badass STEM careers.

Several people tweeted photos of their daughters (and themselves!) rocking Star Wars shirts and costumes.

And Hamill wasn't the only Star to send Simmonds' daughter a positive message. Ashley Eckstein, who voices Ahsoka Tano in various animated Star Wars movies and TV series, responded with a sweet message and a photo of herself wearing a Star Wars T-shirt with a light saber skirt that honestly passes as formal wear. (Seriously, where can I buy that skirt?)

Simmonds and her daughter have been overwhelmed by the love they've received on Twitter over the past two days. The proud mother sent Romper the following statement about all the support:

The only reason I tweeted what I did was because I wanted to show her that there were cool women out there who love Star Wars too. That was all. I expected maybe five or 10 replies. What I didn't expect was a massive outpouring of love, support and a hell of a lot of attention (not all good). I showed her a handful of messages and I left it there, my child's life is not defined by social media and she has little understanding of it. I believe confidence comes from family and community, not external affirmation online.

Simmonds' daughter found all the feedback encouraging and decided to wear her Star Wars shirt to school — and everything was totally OK, according to Simmonds' statement. She said:

Her school is wonderful, as are her classmates, but most 7-year-olds worry about fitting in - no matter how much their parents remind them to be confident and be themselves. Her fear of ridicule was completely unfounded though because she had a great day at school in her favourite T-shirt and none of her friends made any comment about her outfit.

Simmonds later followed up on Twitter, letting all of her daughter's supporters know how much their words helped.

As with most viral tweets, this one did get some negative responses — but Simmonds is focusing on the positive impact it had on her kid. "At the end of the day I hope the thread was a positive thing," Simmonds says. "My child saw that the world is filled with different men and women sharing one passion, and lots of people proved that sometimes Twitter can be a nice place."