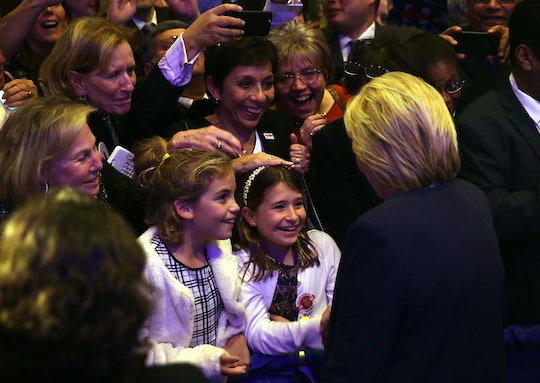 The most popular Halloween costume theme among kids this year is superheroes. But for one boy, he chose to dress up as another person he admires: Democratic presidential candidate Hillary Clinton. This 8-year-old boy dressed as Hillary Clinton for Halloween, and it’s an important, beautiful statement.

Twitter user @DebbersGar, who asked that her real name not be used to protect her son from trolls (the internet is that horrible), posted the image of her son's Hillary Clinton costume on the Sunday before Halloween. The photo has gone viral.

@DebbersGar revealed in another tweet that her family is "all about Hillz," and used the tags #ImWithHer and #HesWithHer in the now famous photo. She also wrote on Twitter that the idea to dress up as Hillary Clinton was actually intended for @DebberGar's 5-year-old daughter. She refused.

"She was saying no to everything," she said in an interview with Mic. "And then our son said, 'Someone has to be Hillary, I'm going to be Hillary!' He completely dropped his costume idea which was a character from a video game that's also a female character. He just was so gung-ho. He was so excited."

Getting the costume together was a team effort. @DebbersGar's co-worker posted on Instagram that she was bringing in a Clinton campaign banner to help her son with his costume. According to @DebbersGar's interview with Mic, her son's yellow blazer actually belongs to his grandmother, who brought more than six to choose from. The hair was the easiest part — it's all his.

@DebbersGar, who also posted the picture on Instagram, wrote there that her son was "proudly" stepping "onto the Halloween Trail."

Because it's the height of election season, it's no surprise political costumes are extremely popular this year, even among children. But it's not just the pantsuits that makes young girls and boys want to dress up like Clinton — for them, Clinton represents the unlimited potential for kids to become anything and everything they want when they grow up.

For 7-year-old Lily, who received a letter from Clinton in September, Clinton's presidential nomination made her excited because she felt she could become president one day. “Seeing the effect those words had on my daughter, I knew that these words were for her, but not just for her," Lily's mother, Jennifer Rosen-Heinz, told The Huffington Post. "They were really for ALL girls (and boys) in this country."

And it looks like Clinton really is inspiring boys, as well. In an interview with Mic, @DebbersGar talked about how much her son values gender equality:

I would definitely say that he is very committed to gender equality. He's so like, I can wear whatever I want. There are no colors that are for boys or girls. There was no question that he couldn't be Hillary [because] he's a boy. He's his own person.

The fact that kids admire Clinton enough to feel it's important to celebrate her on a night when they could be literally anyone is so beautiful.

Update: A former version of this article included the name of the Twitter user. Her name has since been removed to protect her son’s privacy.