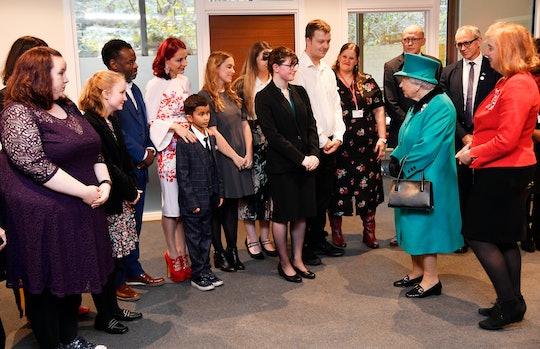 Meeting the Queen is definitely a big honor, but as exciting as the moment may be, it also has to be seriously anxiety-inducing. And for one young British boy, it clearly appeared to be way too overwhelming. On Wednesday, the monarch made an official visit to Coram, the United Kingdom's oldest children's charity, and Nathan Grant and his parents were among those chosen to greet the royal. But as the Queen approached, the nervous-looking child quickly slinked away, according to People, and, well, this 9-year-old boy's hilarious reaction to meeting the Queen pretty much perfectly sums up how most of us probably wish we could respond in awkward social situations.

As he waited for his chance to meet the Queen, Nathan stood in a line with his parents, television presenter Carrie Grant, and vocal coach David Grant, who have long been supporters of the charity, according to The Independent. After the Grants curtseyed and bowed before the Queen, Carrie introduced Nathan by saying, "we are hosting today, and this is our adopted son."

The 9-year-old, who was adopted by the Grants after being in foster care — and who the couple previously explained to Hello! Magazine struggles "with attachment issues and ADHD" — pretty much took one swift look at the Queen, before promptly hitting the ground and crawling away.

But thankfully the move prompted laughter from the group, including the Queen, and left Carrie to quip, "that's his version of a bow."

The 92-year-old queen was visiting the charity to formally open The Queen Elizabeth II Centre, a children's center at London's The Foundling Hospital created in honor of the 350th anniversary of the birth of the charity's founder, Thomas Coram, according to The Independent.

Yet Nathan's unexpected reaction likely wasn't the only memorable moment the Queen experienced during her visit. Upon her arrival, the Queen was actually greeted by 102-year-old Edward Newton, who was the "oldest surviving pupil from The Foundling Hospital," according to The Independent, and who remembered when the Queen's father, King George VI, made his own royal visit to the hospital in 1926.

Thankfully, the Queen also had a number of other interactions with youngsters at the event that went much smoother. In fact, she even shared a sweet moment with 8-year-old Shylah Gordon, whom she helped place ornaments on the center's large outdoor Christmas tree, according to The Sun.

Following the event, Carrie Grant posted a clip on Twitter, of the funny moment between her son and the Queen, and joked, "There's always one. Why is it always mine?"

Most people on social media, of course, seemed to find the moment completely hilarious, although it also pretty much perfectly summed up the way so many of us feel about existing in the world:

And well, no matter how thrilling it might be to get to meet the Queen, I think it's also pretty safe to say that nearly everyone has to at least consider running away terrified prior to saying hello. In fact, in the ITV documentary, Queen of the World, which aired on HBO in October, even the Queen's own grandson, Prince Harry, shared that he more than understood that feeling.

The prince was filmed meeting with a group of Commonwealth scholars from the Caribbean who were working at Buckingham Palace, and in the footage, Prince Harry joked:

You guys have spent way more time in Buckingham Palace than I ever have, and you’ve only been here two weeks. Have you bumped into the Queen yet? If you suddenly bump into her in the corridor, don’t panic. I know you will — we all do.

In other words? It sounds like Nathan Grant definitely has Prince Harry's sympathies, and that like pretty much everyone else, he'd likely find the clip of his meeting with the Queen hugely entertaining. And hey, at the very least, it's probably likely that the Queen herself won't be forgetting young Nathan anytime soon.

More Like This
Kim Kardashian Says She's "Shaken" By Balenciaga's Ad Campaign Featuring Children
Prince William Promised A Little Boy He'd Hang His Mickey Mouse Drawing On His Fridge
Viral Reddit Post Asks If A Toddler Can Watch Cartoons Without Headphones On A Plane
Over 10,000 Sippy Cups & Bottles For Toddlers Recalled Due To Lead Poisoning Hazard