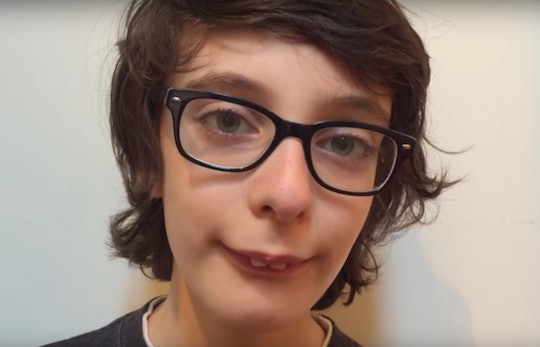 Sometimes it can be hard for kids to understand why a classmate may get very upset when things don't go as planned or why he doesn't answer their questions right away. At one North Carolina elementary school, that student was George Yionoulis. But, now, his peers have a better handle on what makes George George, thanks to the music video the 9-year-old made to explain his autism. But it's not just the 21 fourth-graders at Douglas Elementary sharing a classroom with George who are benefitting from his creative, engaging, and — most importantly — informative video. Nope, having racked up tens of thousands of views on YouTube, the video is a viral sensation that can teach us all a thing or two.

George originally decided to put together the video — which includes home videos and pictures of George and features songs he wrote and performed as "DJ Geo Yio" — to help his classmates better under his autism. But George's mom was so impressed with the six-minute final product that she shared it on Facebook and YouTube last week, according to CBS News. And the fact that it is now accessible to anyone with an internet connection is great news, because George truly did a beautiful job of showing viewers, especially young ones, that "I'm a kid just like you."

In the video, titled "My Autism," George shares some of the things he loves: making music, drawing, art, Harry Potter, tacos, Minecraft, the video game My Singing Monsters, and dancing. The kid loves to dance. In fact, video snippets of him dancing are a common thread throughout the video. That and his autism, of course. "I have this thing called autism," he says in the beginning of the video, after he's introduced himself.

And then he breaks down exactly what that means for him: He didn't begin talking until he was almost 3 years old (that's certainly not a problem now, though). He usually can make eye contact with others, although he wasn't always able to do so. And he gives viewers an idea of how he experiences the world:

Like a lot of other kids with autism I might not have been looking, but that didn't mean I wasn't listening. Speaking of listening, I can hear a lot of things and sounds all at the same time, which sometimes makes it hard to focus on any one sound or thought. That's why it may take a little more time to answer you when you ask me a question.

George also explains in the video that he tends to get upset and frustrated when something unexpected happens or when he makes a mistake. Another thing that might set him apart from his classmates is that, as he explains, "when I get very excited about something, I flap my hands or bounce up and down." He also takes the things other people say literally, so, he says, if someone tells him to keep his eyes peeled, for example, he thinks that's pretty gross. So, here's what he wants people to know about communicating with him: "If you're very specific when you talk to me, everybody wins."

Most of all, though, George wants his peers to know that he's just like them, and that he wants to be a part of what they're doing:

This video truly has the power to do wonders for the way our society may view people with autism. It's also a great way for kids who have autism, like George, to know that they're not alone. Kudos to George for being so open and honest about his life in such a fun and endearing way.