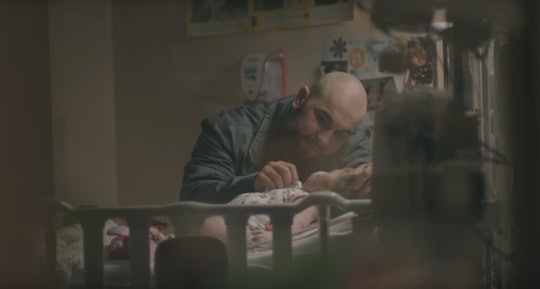 With Father's Day fast approaching, dads are the focus of many television commercials this month. But unlike the mass media commercials selling grills, cell phones, or new cars, a fundraising ad by The SickKids Foundation shows another side to fatherhood: what it means to be a dad to a sick child. (Get your tissues handy, because this one is definitely heartwarming.)

The star of this commercial is a hardworking father with twin daughters. We follow him throughout a day in his life. His routine takes us from his workday to his "night shift," which is spent in a Toronto hospital’s NICU. This is a true story, set in the hospital where one of his daughters was a patient for 16 months, from her birth up until a few short weeks ago. After spending just a minute and a half with this father, we see how much of his life is spent supporting his family, in and out of the hospital.

After learning about this family's struggle with childhood illness and the challenges it faces, viewers are encouraged to make a donation to the hospital this Father's Day and help those in need. Unlike other holiday commercials with an economic agenda, this ad provides an opportunity to give back.

The Canadian hospital responsible for the tearjerking ad, The Hospital for Sick Children, also known as SickKids, released a similar fundraising commercial about the life of moms to sick children in time for Mother’s Day.

The SickKids Foundation, established in 1972, is promoting the Father's Day ad as part of its "Get Better Gifts" campaign, wherein gifts are donated in the name of the recipient, but benefit a child in the hospital. Examples of Get Better Gifts range from donations that help the hospital promote healing through play to essential healthcare items that the hospital is in need of. The fundraising efforts are based on "the belief that improving the health and well-being of children is one of the most powerful ways to improve society."

Fathers play a crucial role in parenting within heterosexual relationships especially. Studies have shown that when dads are involved, children grow up to be more sociable, emotionally secure, confident, and eager to explore the world around them.

In the midst of planning backyard barbecues, shopping for neck ties, and setting golf tee times, Father's Day is a time for reflection on the importance of dads and father-figures alike. It is also an opportunity to support parents like the star of this commercial who are fighting sometimes-hidden battles with childhood illness and rely on the services of organizations like SickKids.