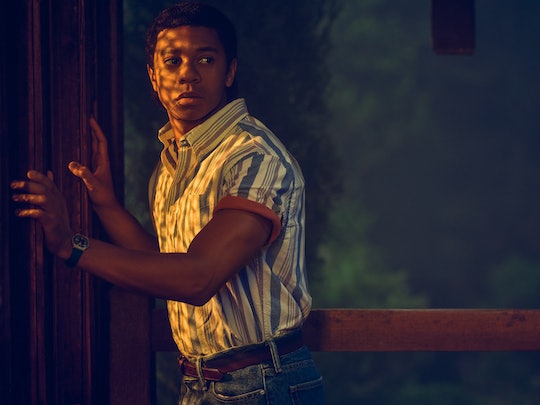 Fans of American Horror Story have come to expect twists from the series, which is why the simple premise of 1984 has so many viewers feeling suspicious. Perhaps the show is taking a break from overly complicated storylines with a relatively straightforward slasher season. It's possible, especially after the ultra-convoluted fun of Apocalypse. But this AHS: 1984 theory doesn't think that's the case. It proposes that everything viewers have seen so far is a lie.

That would be typical for AHS; it often flips the script somewhere in the middle of the season and goes off in a different direction than its first few episodes. Apocalypse began with a group of survivors trapped in an underground bunker after the end of the world, then abandoned them to delve into Satanism and witchy politics. Roanoke seemed like a docuseries about a haunted house until it became an all-out bloodbath. There's no way 1984 is just about scaring the pants off some camp counselors.

In the first episode, a scene of Brooke (Emma Roberts) running away from the killer Mr. Jingles (John Carroll Lynch) was intercut with the rest of the characters watching the Olympics. Reddit user VenablesBigDikEnergy thought that was more than a stylistic choice — it actually hinted at this season's potential twist.

Before 1984 aired, a few fans thought that it would echo Roanoke's show-within-a-show framework. The promos came in the form of screen tests, with the characters walking directly to camera to show off their costumes. Some theorized that they were actually actors cast in a summer camp slasher. At some point, it would be revealed that all the action was taking place on a set. Reddit user VenablesBigDikEnergy took that idea a step further: they believed that the characters were actually on a survival game show where they had to fight for their lives. Brooke's flight was intercut with the Olympics because both were entertainment, albeit of a very different kind.

The user's evidence was the extreme nature of the booby traps set up around the camp, which can be glimpsed in the trailer for Episode 3. Mr. Jingles was known for killing his victims with a knife and taking their ears, but in upcoming episodes the characters will find themselves impaled on spikes and and dodging clubs. It all seems a little too absurd, but it would make sense if the characters were being surveilled and hunted down by some unseen force. The Arena in The Hunger Games got pretty creative, too.

The theme of surveillance would tie into the season's title as well. Many thought that 1984 was a reference to the George Orwell novel of the same name, which is about a dystopian future where people are watched by the government. It isn't clear who would be watching the 1984 counselors, but their suffering could be at the whim of someone more powerful (maybe even the Collective from Apocalypse). Perhaps Xavier (Cody Fern), the actor of the group, even lured them there on purpose because he's aware that it's all for entertainment.

The idea of innocent victims being forced to commit horrors while being watched by an anonymous perpetrator isn't that unusual in horror. That's a component of the Saw franchise, as well as the more satirical Cabin in the Woods. If AHS took inspiration from all those sources, then it's possible that this theory could be true after all.