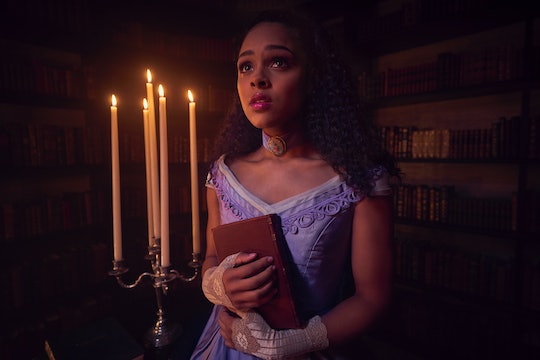 Before American Horror Story: Apocalypse premiered, series creator Ryan Murphy revealed that it would be a crossover between two popular previous seasons, Murder House and Coven. But after the first episode, fans may have found a link to another season, too. This AHS: Apocalypse theory will blow your mind, because it connects this season to Asylum in a way that might make a lot of sense.

In "The End," viewers were introduced to two new characters named Timothy and Emily. They had both been selected for Outpost 3 by a shadowy organization known only as the Cooperative. The reasons for this weren't entirely clear, either; most of the people in the bunker bought their way in, but Timothy and Emily were chosen based on some special quality in their genetic makeup. They had located Timothy because of DNA he'd submitted to a genealogy website, which seemed like a quick joke in the moment but could have actually been a major clue. That's because this theory posits that he and Emily are the descendants of Asylum's Kit Walker.

In Asylum, Kit had two children with two different women: a daughter named Julia with his wife Alma and a son named Thomas with fellow Briarcliff patient, Grace. Their conception was one of the most confusing parts of the season, because it was aided by aliens who were never fully explored or explained. But if Timothy and Emily are related to Kit's children, perhaps they share some alien quality. And that's why the Cooperative wanted them.

The theory was first presented long before Apocalypse aired, which makes it strangely prescient. In 2016, Reddit user jcoleman87 posted the following:

An idea: the final season of the show is Apocalypse where Michael Langdon fulfills his part as the antichrist and starts the tribulation. I think I remember hearing that Ryan has said all the seasons will connect in the end so my idea is this: what if when the aliens impregnated Alma and Grace so that there will be superhuman type people on earth to fight against the antichrist and Satan? Or what if they're bringing actual angels and putting them into human bodies to set the stage for the upcoming war? Just an idea. [sic]

Apocalypse won't be the final season of the show (AHS was renewed through Season 10, according to Variety), but the rest of it fits to a startling degree. Michael Langdon did make his return in Apocalypse and the trailers for the rest of the season hint at his possible Satanic powers. Timothy and Emily could be here to stop him, especially if they are related to Thomas and Julia.

Kit's children were special because of whatever the aliens had done to them in utero. They were almost preternaturally calm and seemed to possess healing powers of some kind that allowed them to help Sister Jude towards the end of her life. Those kinds of skills could really come in handy at the end of the world.

It does seem possible for Timothy and Emily to be Kit's descendants, but they would have to be his great-grandchildren for the timeline to work out. Julia and Thomas were born in 1964, so their children would be much older than the college-aged protagonists of Apocalypse. But Timothy and Emily could be Julia and Thomas' grandkids, even if they're unaware of it. One or both of them might be adopted; perhaps that's why Timothy submitted his DNA to the genealogy website in the first place. He may have been trying to find his biological family.

The AHS Wiki does list the Campbells as Timothy's adoptive family, though this is not an official source and there doesn't appear to be any confirmation from the show itself that this is the case. Still, it's curious. Another curious detail? Episode 1 of Apocalypse repeatedly played the Carpenters' cover of "Calling Occupants of Interplanetary Craft." That might be a hint that the aliens of Asylum will be back.

If Timothy and Emily are connected to the aliens from Asylum, then this season could explain an aspect of AHS that had long been left mysterious. Viewers never quite knew why those aliens were so focused on Kit; maybe it was because they were using him to create the saviors of the future apocalypse. It could be a stretch, but weirder things have happened on AHS.