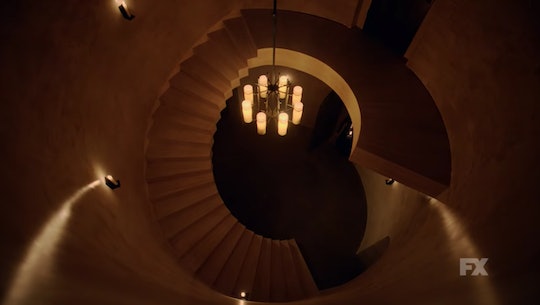 Fans Theorize That Each 'AHS: Apocalypse' Episode Represents A Circle Of Hell

Fans of American Horror Story have theorized for years that each of the seasons corresponds to one of the circles of hell from Inferno, the first section of Dante Alighieri's epic poem The Divine Comedy. But Season 8 has viewers reworking that idea to make it a bit more specific. This AHS: Apocalypse theory has fans brushing up on their Dante to see if it actually fits this season better than it does the show as a whole.

In Inferno, Dante is guided through the nine circles of hell by the poet Virgil. Each circle is devoted to a specific sin: the first is Limbo, followed by lust, gluttony, greed, wrath, heresy, violence, fraud, and treachery. Since those are common themes throughout AHS, viewers began to suspect that each season was inspired by one circle. It became so popular that creator Ryan Murphy commented on it, telling TV Guide in 2017, "With AHS, I do like the Dante's Inferno theory. I've read a lot about it. I know what the fans think. I have a theory about the show that I've never told anybody and probably won't until it's over, but that theory is a good one."

The theory has evolved in the wake of Season 8's premiere. Now some viewers have started to wonder if every episode of Apocalypse represents one of the nine circles instead.

Reddit user hellaquin explained how that might work. The first episode, "The End," is Limbo: in Dante's poem, that's where the unbaptized reside alongside virtuous pagans, but on AHS it serves as an introduction to this new, uncertain world. The souls trapped in Limbo aren't believers in Christ, and that could be represented by the Apocalypse survivors not truly believing in this new world order they must abide by.

Next is lust. That's a clear theme in "The Morning After," where several characters find themselves in dire straits after breaking Ms. Venable's abstinence rule. But since none of the other episodes have aired yet, the rest of the post is much more speculative. Redditor hellaquin writes that Episode 3, "Forbidden Fruit," could work as gluttony because of promo scenes of Mallory bobbing for apples, as well as the general threat of running out of food in the bunker.

They couldn't figure out how Episodes 4 and 5 related to avarice and wrath just yet, but heresy was easier. The sixth episode allegedly returns to the characters of Season 1 and might revisit Michael Langdon's youth with his grandmother Constance. "Since the episode is titled 'Return to Murder House,' maybe it has something to do with Michael's past, which is heretical, being the Antichrist and all," hellaquin wrote.

Episode 7 is titled "Traitor," and one can see how that might result in the violence of its corresponding circle of hell. After that is "Sojourn," which could represent fraud, possibly following up on the traitor of the previous episode. So much of the characters' lives before the world ended remains unexplored, which means any of them could be fraudulent.

The untitled ninth episode would then refer to the deepest circle of hell, treachery. In another post, Redditor m4jort0m wondered if that was where fans would see Satan himself: in the center of hell. If Langdon truly is the Antichrist, then it wouldn't really be a stretch for the devil himself to get involved in the season.

It's so early in Apocalypse that it's difficult to tell how all the pieces fit together. However, the fact that Murphy is a fan could be promising. Perhaps he chose to model the structure of Season 8 after the theory because he liked it so much; it would also be a fun nod to fans that have been with the show since the beginning. Is there a ton of proof? Not necessarily. Is it possible? On American Horror Story, all things are possible.