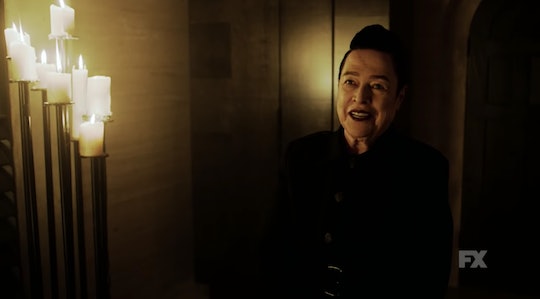 Ms. Mead Could Be Constance Langdon On 'AHS: Apocalypse'

In "Forbidden Fruit," American Horror Story: Apocalypse revealed that there was a connection between chief antagonist Michael Langdon and newly-realized robot Ms. Mead. He had a hand in her creation and based her on the only woman he felt truly loved him. A theory resulted from fan interpretation of that statement: that Ms. Mead was programmed to have Michael's grandmother's memories, since she raised him. This AHS: Apocalypse theory posits that Ms. Mead is Constance Langdon.

It's difficult to pinpoint where the idea originated from, because it seems to be a fairly common opinion. Everyone knows that Michael was raised by Constance because she was taking care of him when he was a toddler in the final moments of Murder House. She seemed to love him with the intensity that Ms. Mead displays; they both notably remarked on Michael's beauty, and Constance was so indulgent of him that she wasn't perturbed when he murdered his nanny as a child. It makes sense that when adult Michael speaks of being raised by a woman who loved him, he would mean Constance.

Several reviews of the episode, including those for Vanity Fair and Vulture, stated that Mead appeared to have Constance's memories. Reddit took the idea and ran with it, too. But while there is some evidence to support it, there is also some evidence to the contrary.

First things first: the scene between Mead and Michael at the end of Episode 3 of Apocalypse. That's where the entire theory springs from, so it's worth taking a closer look at exactly what the characters said to one another. Michael says that when he tasked the Cooperative with Mead's construction, he "gave them a prototype to model, of someone from my childhood. Someone very dear to me."

Mead then remembers the young blonde boy she once cared for, whom she loved and who was taken from her; Michael explains that he lost her once, too, and couldn't bear it. He calls her "the only woman who ever really understood me," to which Mead answers that she was the only woman "who ever really loved you."

Constance certainly loved Michael, but that's really the only similarity between her and Mead. Earlier in the episode, Mead had recounted a series of memories that didn't have much in common with Los Angeles housewife Constance Langdon. Mead remembered going trick-or-treating as a robot, seeing Rosemary's Baby in theaters on her first date, and killing a man during her time as a Mossad agent. Constance was a killer, but she was never a professional assassin.

Redditor MagickMaggie speculated that perhaps Mead's memories were pulled from a variety of people, not just Constance. They wrote: "it seemed like she was programmed with memories of a few different people, because the years and the ages didn't seem to add up." Another user, suspiria84, wondered if perhaps Michael simply made up memories because he didn't know Constance well enough to fill in her past (though, as the Antichrist, one would imagine he's all-knowing).

But while Constance may have adored Michael, all of her children did end up resenting her, so it's plausible that she and Michael would have a complicated relationship, too. He never calls Mead "grandma" or speaks to a family connection; it's also odd that he wouldn't model her appearance after Constance too, since it's not like anyone in the Outpost knows enough about Michael's past to know who his grandmother was.

An alternate theory emerged that Robot Mead was actually based on Michael's nanny. She would still have taken care of him, possibly until she was fired or died. It would make sense for Constance to seek out a caretaker with such an extreme military past; toddler Michael probably would have had more trouble taking out an ex-Mossad agent. Ryan Murphy also posted a picture on Instagram of Kathy Bates and Cody Fern on set together that appeared to show a younger Mead and Michael hanging out.

If Michael really did use a singular prototype as he said, then it seems unlikely that Mead is based on Constance. However, there's no telling what strange twists await in future episodes of AHS.