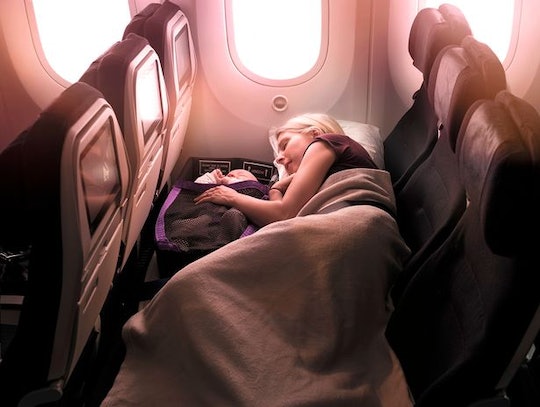 Any parent can tell you that flying with an infant is a "long haul" in more respects than one. Depending on how the baby handles the noise, lack of space, dry air, time-change, and pressure, it can be incredibly stressful for parents, baby, and everyone around them. In an effort to reduce this stress, one airline has special seats for parents flying with babies. By allowing infants to spend the entire flight lying down, everyone is more comfortable, and no one has to spent a 12-hour flight jiggling their baby in an Ergo by the bathrooms at the rear of the plane.

Air New Zealand's "Skycouch" — a row of three economy seats that can be turned into a flat surface — already allows children to lie down while the plane is cruising (parents need to have infants on their lap for takeoff and landing currently), but proposed changes to the set up will make flying even better, as reported by the Mirror. The new Skycouch design offers an infant harness and belt that allows children to lie down for the entire flight, including takeoff and landing, and for two children to lie side by side, buckled in. Another option, the "infant pod," provides a secure, cozy place for the baby to travel close to their parents. These options free parents from the stress of bouncing a baby on their knees for hours at a time and allow babies to come out of their carseats, facilitating the elusive airplane sleep that most parents in transit only dream of.

The original "Skycouch Cuddle Belt," created in 2011, was previously available to two adults or an adult and child traveling together in order to allow them to lie down, according to HuffPost UK, but has since been changed to provide parents with more options.

While we initially marketed the Skycouch to couples, we quickly found the product suited parents with young families especially well. Parents can relax while their children are able to have their own space and flat area to play without interrupting other passengers.

After speaking with parents and other customers who have used the Skycouch, the airline's staff worked to tailor it to their needs. Once approvals come through, the new family-friendly seats will be available in a matter of months. At a time when treatment onboard air carriers seems to be getting worse, and parents are offering goody bags to fellow passengers to offset the discomfort caused by the presence of young humans on the flight, the design change shifts the conversation back to how best to accommodate families, and facilitate things like nursing and sleep that can make travel easier on everyone.

For those parents who don't have the option of flying with Air New Zealand or taking advantage of the Skycouch, preparation is key to surviving flights with babies. Parents recommends, above all else, that parents buy babies their own seats and bring along a car seat (though this will certainly limit your ability to spread out). While many airlines offer free flights for children younger than two, holding little ones in your lap for the duration of the flight can get very uncomfortable. There's always the chance that you'll find an empty seat for your little without paying, but many flights are full. Additionally, Parents pointed out that giving babies their own seats is the safer option as well:

Evidence suggests that "lap children" are among those most likely to suffer injury or death in the event of an accident or severe turbulence. You should keep your child strapped in on takeoff and landing and as much as possible during the flight.

Along with bringing a seat for baby, Parents recommended strategic seat planning. By letting airline employees know that you're traveling with an infant and car seat, you can avoid breaking any restrictions about where the seat needs to be placed — generally by the window to keep from blocking other passengers. Additionally, the front of the plane is more comfortable for babies as the rear is "noisier, vibrates more, and is less convenient for deplaning than the front," according to Parents.

Aside from seating arrangements, many parents worry about their babies experiencing ear pain during the flight. To reduce the ear pressure that causes that pain, What To Expect recommended planning feedings for takeoff and landing, as swallowing can help pop their ears. Also, don't be afraid to ask flight attendants for help. If your baby is refusing a cold bottle, there's no shame in asking the attendant to heat it up. Bottle feedings aren't your only option, though. Breastfeeding and pacifiers also require the same sort of sucking that alleviates pressure.

Flying with babies and young children may never be easy, but Air New Zealand is making it a lot easier. Hopefully more airlines will adopt similar arrangements to allow everyone a bit more comfort. I doubt anyone would mind fewer screaming babies on board.