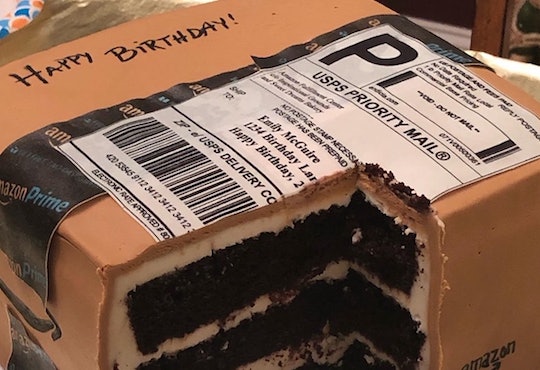 Everyone knows the true agony and ecstasy that is Amazon Prime. Between the two-day shipping rates and a cornucopia of items you never knew you needed, it only makes sense that those iconic brown and blue-taped boxes would end up littering your home. And one shopping lover's husband decided to pay homage to this with an 'Amazon Box' birthday cake, which is undoubtedly any Prime lover's dream come true.

For Emily McGuire, a photographer based in North Carolina, her love for Amazon Prime was summed up with a sweet birthday cake from her husband. The cake, which she posted a few shots of on Facebook last week, was a brown square with "Amazon Prime" tape around the center and a UPS priority shipping slip on the front, addressed to none other than Emily herself, at "1234 Birthday Lane," in Happy Birthday, 2U. On the side of the cake was a handwritten message: "Happy birthday!"

"When you order a lot from Amazon... you get an Amazon box cake," McGuide wrote succinctly on the post, which is, honestly, extremely impressive.

McGuire tells Romper that her husband hired the Sweet Dreams Bakery of Dunn to make her birthday "dreams" come true. "I died laughing!" she says. "I really thought for the first time, he 'gets' me!"

Get her, he did, though McGuire tells Romper that her husband has always been creative throughout the course of their almost two decade long relationship. She went on to share that while the couple have been together for just under 20 years, even all this time later, he still continues to surprise her in new and inventive gifts. "It's not really a special birthday," McGuire says, "but it is sure one I will never forget now."

As for her shopping habits, McGuire laughs and says that she probably receives about two to three packages per week, mostly from whatever great deals she finds on the "lighting deal" page.

After some popular Facebook pages saw the post, they began re-sharing it, and McGuire's cake has since gone viral, with one page racking up more than 26,000 reactions.

"I want this for my next birthday," one commenter wrote. "I once made Christmas cookies that looked like Visa cards, to capture the true spirit and magic of the holidays," another shared. "When you text saying you want an amazing birthday cake and autocorrect changes it to Amazon!!" joked yet another.

It's clear that McGuire thoroughly enjoyed her delicious, and very apt birthday surprise, as did tens of thousands of others on social media, who related all too well to their consistent accumulation of little brown boxes from Amazon. As for whether or not you could recreate it for someone else's birthday, well, you might want to call Sweet Dreams instead. Given how much fondant and detail-work is required, this project might be best left to the pros.

Either way, you have some inspiration to take to your local, talented bake shop, to surprise the the bona fide Amazon lovers in your own life.