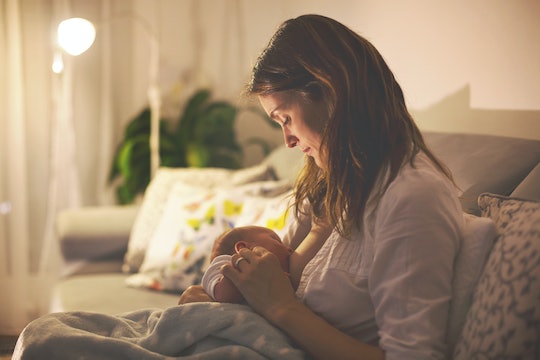 Although health professionals recommend breastfeeding for the first months of an infant's life, the rates of breastfeeding moms are still pretty low, according to the Centers for Disease Control and Prevention. To help bring those rates up and make it a more realistic way to feed a newborn, two Purdue University professors have created an app that connects breastfeeding mothers with lactation experts. Which is exactly what the CDC officials think can help, according to their breastfeeding report card from 2014, which suggests that communal support helps women stick with it longer.

Azza Ahmed, an associate professor in Purdue's School of Nursing, and Jeffrey Brewer, an associate professor of computer and information technology in the Purdue Polytechnic Institute told Medical Express that there are hundreds of apps out there for new breastfeeding mothers, but none of them give two-way, real-time support. Which is why they created Lactor.

The app allows moms to enter their breastfeeding data and get notifications and then receive help from lactation consultants who receive the data and then can provide specialized advice and support. Ahmed, who is also a certified lactation consultant, said in a press release for Purdue, "Mothers use the app as a type of diary to input data such as how many times she breastfeeds, for how long, how many ounces she may have pumped or additional data like if she’s using a supplement."

Then, the consultants can access the information and detect any problems early on or just answer everyday questions about any breastfeeding frustration.

Breast milk contains antibodies that can relieve allergies and some infections in babies and has also been linked to reduced instances of ear infections and other early childhood illnesses, according to the Cleveland Clinic. For moms, the hospital reports, it can help with postpartum depression, lead to faster weight loss after pregnancy, and prevent postpartum bleeding and anemia.

However, Ahmed says, only 22 percent of infants are exclusively breastfed in the first six months. Supplementing with formula, or just using formula exclusively, has also been found to be just as safe and healthy for a baby, but for those women who would choose to breastfeed if they could, this app could be a huge game changer. Many women have trouble producing milk, which leads them to stop. Sometimes this happens because of postpartum depression and stress or there's an issue with their glands that gets in the way of milk production. Women who take certain medications or have infectious diseases are also unable to breastfeed. There's also the fact that some women choose not to breastfeed their baby for a slew of personal reasons.

But, Ahmed says, the most common problem is an inability to latch, which leads to frustration. She said in the same press release:

It happens often that mothers must come back to the clinic or formula must be introduced early. The inability to latch also could result in hospitalization, sore nipples, discouragement and perceived insufficient milk. Mothers often need confidence to continue breastfeeding due to lack of self-efficacy, self-confidence and social support.

"This is especially common during the first month after birth, and it is the most critical breastfeeding period," Ahmed added. Instead of having to reach out to family that might be driving a new mom up the wall or paying the cost of going back to their doctor for help or hiring their own lactation consultant, accessing an expert via an app just makes everything easier. Ahmed added that that was the whole point for coming up with the app:

We want to create a connection before mothers leave the hospital so that there’s a virtual connection once they get home and the mothers can feel more confident. This way mothers do not have to call and make an appointment or travel back to a clinic if problems arise. This is highly beneficial in rural areas where access to lactation support is limited.

It also cuts through the stigma that new moms might feel about not being "good" at this whole motherhood thing and not asking for help at all, which is more common than some of us might think. The more resources there are for new moms, especially ones who are struggling to breastfeed, the better. Right now, the portal is still in beta mode, but keep the faith — more help is on its way.

More Like This
Is It Safe To Pump While Pregnant? Experts Weigh In
Michigan Right-Wing Group Wants To Erase LGBTQ+ Sex Ed
13 Is "Too Early" For Kids To Be On Social Media, Surgeon General Cautions
Doctors Swallowed LEGOS To Prove Everything Is Awesome For Kids Who Do The Same
What Parents Are Talking About — Delivered Straight To Your Inbox