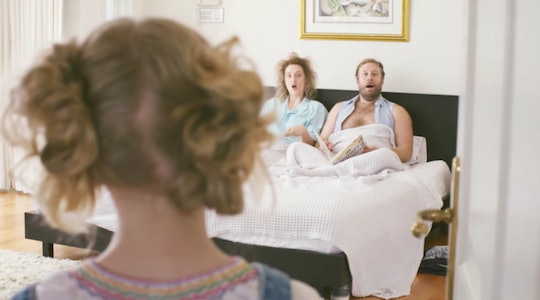 A New App Helps Parents Have Sex Without Worry

It took my partner and I several months before we started having sex again. I had just given birth to our son. Since it was an emergency C-section, my body boycotted any sort of physical touch. But after healing, sex still wasn't on the table (figuratively or literally). We were too worried about waking up our son — we still are. Australia's Four Seasons Condoms has the solution, though: A cartoon app that helps keep kids busy while parents have sex. Alone time is precious, so very, very precious.

According to The Stir, Four Seasons partnered with creative agency Marcel to design a new aptly-named online cartoon, The Extendables, to occupy your children while parents are having sex. The Extendables tells the story of four adorable and hairy extra-terrestrial puppets, Boss, Smarty, Nofu, and Miss, who are traveling to earth and are trying to land their ship. The animated series initially lasts for 12 minutes, but can be extended for five more.

But how, you ask. How will this cartoon app keep my nosy kid or kids from bursting into my room, unannounced and uninvited, while we're having sex?

It's a valid question, I'll give you that.

Here's how it works: the online version of the The Extendables connects to a mobile app on your phone that allows you to monitor your kid's movements. That's because the cartoon connects to your phone, tablet, computer, or smart TV through a webcam, essentially turning it into a motion sensor. According to AdNews, if your child even thinks of moving a inch, you will know.

The Extendables app will alert you when your child has moved away from the screen, so you can prepare for your child's possible entrance. The program will also ping you when there's one minute left to the cartoon; at this point, you can either wrap up your business or extend the show for another five minutes in the event neither or you are satisfied yet.

According to Kidspot, the concept for The Extendables came about after new research found that one-third of Australian parents feared their kids would interrupt them during sex. Another 22 percent of parents surveyed in that study reported having less quality time for sex and romance.

That's a fear and reality I strongly relate to. My partner and I will stop at the slightest sound during sex because we're either worried that our son is hurt or we're worried that our son will catch us in the act. Even at night, when we know he's in a deep sleep, we're on edge. I mean, 17 minutes aren't exactly enough for a good sex session, but at least The Extendables could let you get in a quickie with some peace of mind.