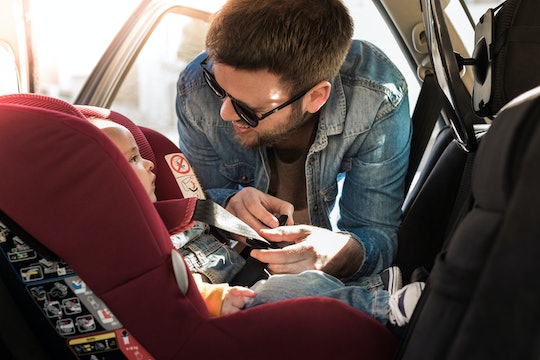 This App Will Help Parents Use Their Car Seats Correctly

It can be hard to keep up with all the changing recommendations for keeping kids safe, but one study has discovered the perfect way to keep the public informed: an app that helps parents use car seats correctly. Honestly, why didn't someone think of this sooner? We have apps for refilling prescriptions and learning foreign languages; I feel like designing one to keep our kids from getting hurt in a car accident should have been developed long before now, am I right?

For the study, a joint collaboration between researchers at Johns Hopkins University and the University of Arkansas recruited parents with children age 4 to 7 years from two different pediatric emergency departments — one in an urban East Coast area, and one in a rural Midwestern area. The parents completed a 10-minute survey to assess their knowledge on car seat safety, as well as their actual practices.

Half of the parents were then given access to an app called Safety in Seconds, which delivered educational information specifically tailored to their needs, based on the answers that they gave. Follow-up surveys were sent three months later, and again at six months, in order to gauge the app's efficacy.

The parents' car seat safety skills were judged on four metrics: whether or not they used the correct type of restraint for their child's age and weight; whether or not they had their child ride in the backseat at all times; whether the child was buckled up every time they rode in a car; and if they had their car seat inspected by a child passenger safety technician. The app, which contains a portal with educational links, was also designed to send users monthly push notification reminders to encourage them to interact with the app.

The age range the researchers chose was based on some rather troubling statistics. Everyone knows that babies should be riding in car seats (which type, and how to correctly install them are a subject for another day), but once kids graduate from car seats, they're supposed to move on to booster seats. However, far too many young children aren't using the proper car restraints for their age or weight, with tragic results.

In fact, a report from 2015 by the U.S. Department of Transportation's National Highway Traffic Safety Administration found that 37.4 percent of American children ages 4 to 7 were not properly restrained; 25.8 percent were using seat belts alone, and 11.6 percent weren't buckled up at all. Only 44.5 percent of 4- to 7-year-olds were using booster seats.

According to the Centers for Disease Control and Prevention, 663 children in the United States under 13 died in car crashes in 2015. Of the 4- to 7-year-olds who died in a crash, 36 percent of them were not buckled up at all, as the CDC noted. Using booster seats for kids 4 to 8 reduces their risk of serious injury by 45 percent, the CDC noted, but an estimated 20 percent of booster seats "are misused in a way that could reduce their effectiveness."

Parents are never without their phones, so it's the perfect medium for delivering safety education and friendly reminders on how to best keep kids safe in the car. When parents in the Safety in Seconds study completed the three-month followup study, researchers found that those who were given access to the app were more than twice as likely to report using the right car seat their kids, having them ride in the back, and having their car seats inspected, as compared to a control group. The six-month surveys related similar results.

Clearly, it's effective. Unfortunately, Safety in Seconds isn't yet available to the general public, but you can put it on your Google Play wish list. In the meantime, you can check out the American Academy of Pediatrics' recommendations via their traditional website, like some kind of caveman.