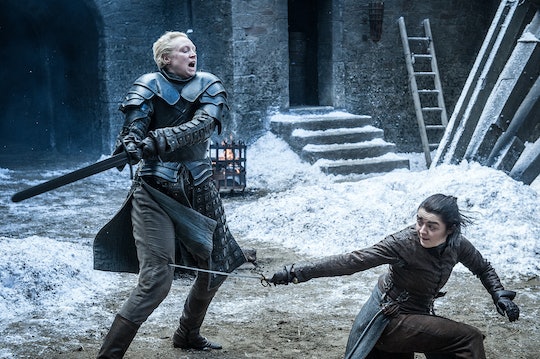 There was a lot of hoopla in Episode 4 "The Spoils of War" about a certain Valyrian steel dagger, the dagger that arguably started this whole mess to begin with. And there's a particular Arya dagger Game of Thrones theory currently circulating that may hold the key to finally defeating the Night King and the White Walkers. Basically, it suggests that the youngest female Stark will use the weapon to kill the Night King and stop the army of the undead from taking over Westeros, thus making the dagger to come full circle.

This particular dagger first made its appearance in Season 1, when somebody used it to try to assassinate Bran. The assassin was mauled to death by Summer (RIP), but the fine quality of the dagger (it was made of Valyrian steel) proved that the assassin was hired by somebody with a lot of money. Catelyn took the dagger to King's Landing, where Littlefinger proceeded to tell her that it once belonged to him but that he lost it in a bet to none other than Tyrion Lannister, leading Catelyn to kidnap Tyrion, and from there hostilities between the Lannisters and the Starks grew, resulting in the eventual death of the King in the North, the capture of Jaime, the Red Wedding, and more.

Now, Littlefinger tried to butter up Bran by giving him the dagger to him as a gift, but Bran just gave it to his assassin sister Arya. For what purpose? We have yet to find out.

Some theories believe that Arya will use the Valyrian steel dagger to kill the Night King. This would be a nice bookend to the series, in that the same dagger that started all the action would be the one to finish it. Personally, I am on board. Redditor ragaed made the excellent point that all the foreshadowing in the series points to the dagger being very important to the story's conclusion. Because Bran now knows everything, even repeating Littlefinger's creepy line "chaos is a ladder" back to him, everything he does is now pretty significant.

As Sansa pointed out, Littlefinger surely had a motive for giving the dagger to Bran, and Bran surely has a reason for passing it along to Arya. Perhaps he knows that she is the one who will wield it to kill the Night King. And let's not forget that the knife also made an appearance in the Season 7 premiere in one of the books Sam was combing through at the Citadel. This prompted the reddit user to believe that the dagger "will be wielded to stop the Night's King in some fashion."

There is simply no way that the dagger is going to be insignificant in episodes to come. Arya's sparring match with Brienne proves that she has the goods to destroy anyone who comes in her way, and that is probably going to include the army of the dead in the near future. Now that she has a weapon that can kill White Walkers, let's see how deadly she truly is.