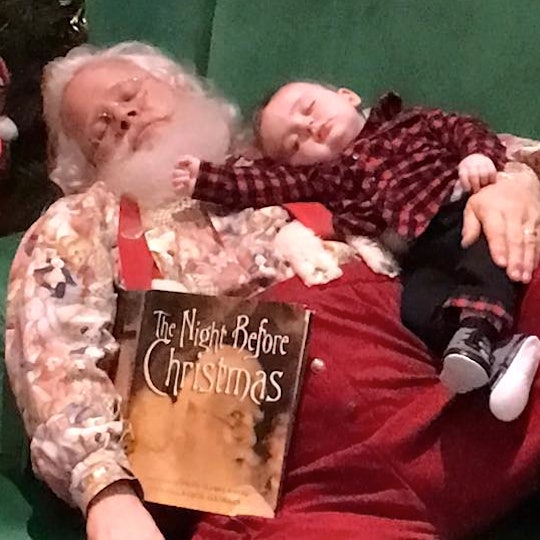 This Baby Fell Asleep Waiting To See Santa, So Santa Just Rolled With It — PHOTO

For most children (and some adults), there's nothing as exciting as seeing Santa. You get to list off everything you want, he has to listen without rolling his eyes, and in the end, you get free candy. And for six-month-old Zeke, the excitement was a little too much. On November 26th, Donnie Walters his son took Zeek to see Santa for the first time, in Evansville, Indiana. Amidst all the first-time jitters and palpable anticipation, little Zeek fell asleep before he was able to meet Santa. Instead of waking the sleeping baby (a true parenting crime if there ever was one), Santa played along like the jolly boss he is.

The result: adorable pictures Donnie and his family are sure to cherish forever. Hey, the holiday season is exhausting you guys, and it doesn't matter if it's because you have to deliver toys to children all around the world, or you have to wait in line to make sure Santa knows exactly what to deliver.

Of course, Zeke isn't the only adorable baby to meet Santa and capture the internet's collective heart. Here's a few of our absolute favorite moments, where baby's and Santa met for the first time. If anything can capture the joy of the holiday season — and remind us all of how scary Santa can be — it's moments like these.