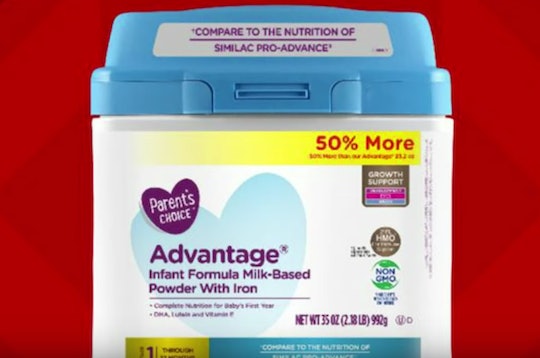 How To Tell If Your Walmart Baby Formula Was Voluntarily Recalled

Infants can be so picky when it comes to formula. So, when parents find a formula that works best for them, they stick with it. But, they might need to check their formula stock ASAP because a baby formula was voluntarily recalled due concerns of metal — and here's what parents need to know.

On Friday, the Food and Drug Administration issued a voluntary recall nationwide for over 23,000 35 ounce containers of Parent's Choice Advantage Infant Formula Milk-Based Powder with Iron. These formula tubs, produced by Perrigo Company, were sold exclusively at Walmart stores across the United States, according to People. A representative for Perrigo Company did not respond to Romper's request for comment at this time.

As previously stated, this recall should be a concern for any parent. The perfect formula is so hard to find, especially since some infants seem to disagree with everything that comes in their path. So, if parents are relying on this formula, then they'll want to make sure that there isn't a cause for concern.

But, it's quite easy to tell if the formula in their possession is a part of this voluntary recall. Consumers who have purchased this product can identify it by the lot code and use by date on the bottom of the package. If the bottom of their formula container has the Lot Code C26EVFV and a "use by" date of Feb. 26, 2021, then people should stop using the product immediately, according to CNN.

It's imperative that consumers take this very seriously, especially since the voluntary recall was issued because of the potential presence of metal foreign matter in the single lot of the product, according to CNN. So, all of the containers in the lot had to be voluntarily recalled. But, no adverse reactions to the product have been reported — the recall is only being issued "out of an abundance of caution", according to the FDA.

Still, the potential presence of metal foreign matter is enough to have any parent shaken up. Luckily, there is a simple solution being presented for any inconvenience that this voluntary recall might have caused. If consumers have this product in their possession, all they should do is stop using the product and visit any Walmart store for a full refund, according to a press release from Perrigo.

According to a description for the item from Walmart.com, the formula is a milk-based powder meant to offer growth support for infants. The formula is meant for babies up to 12 months of age and has pretty excellent reviews. Reviewers of the product love that it is budget friendly and really like that their infants like it a lot.

Since it is so popular on the website, this is all the more reason for people to pay attention to this voluntary recall.