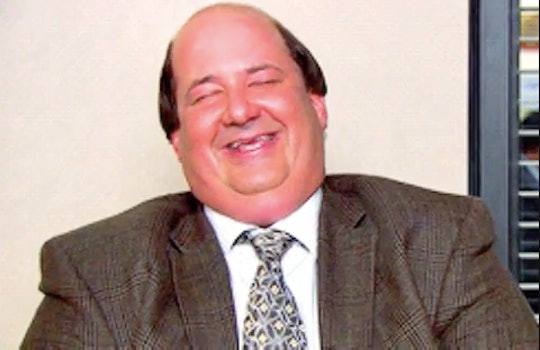 'The Office' Fans Are Howling Over This Kevin Costume For Babies

No matter how much time has passed, The Office is just one of those shows that will never get old. The jokes are always hilarious, no matter how many times you've heard them, and because every episode is on Netflix, you can relive the humor and wackiness of Dunder Mifflin whenever you wish. With that being said, it's a given that you will love this baby Halloween costume of Kevin from The Office, and you can thank Jenna Fischer for sharing this inspiration.

Sure, The Office has been off the air for quite some time now — the last episode aired five years ago this past May, according to The Hollywood Reporter. But the fact that people are still talking about the show several years later, and its hilarious jokes, makes it all the more special, iconic, and timeless. People really do love the show — fans of The Office are everywhere — and it's never too early to introduce a new face to the show, even if they're still in diapers.

This is exactly why people will fall in love with Jenna Fischer's (aka Pam from The Office) Instagram post on Wednesday. The heavily photoshopped picture is a spoof of an Amazon children's Halloween costume listing — featuring a baby wearing an oversized brown suit and a bald cap on his head. A pot of spilled chili sits at the baby's feet — and the baby in the photo looks so upset about it. The title of the costume? "Paper company accountant spilling a pot of chili."

The costume is a clear play on (inarguably) one of the best episodes from The Office — "Casual Friday" — when Kevin (an accountant at the paper company) spills his pot of chili (and tries to save it with clipboards). "Halloween idea," Fischer captioned the photo.

Fans can't help but agree with Fischer, taking to the comments of the Instagram post to share their thoughts about the "costume." Spoiler alert: everyone is obsessed with it.

"This. Is. Epic.," another commenter wrote.

"I will gladly become a baby again just to wear this costume," another commenter added.

Isn't that the truth?

The bad news is, this is not a real costume — the fake listing was made by Instagram user and BrandFire founder @adamthecreator, who has created some other hilarious (and super topical) costumes for babies this year.

But the good news is, this costume can easily be recreated for babies and adults. All they need is a brown suit (which can be found on Amazon), a bald cap (and if your baby is bald, you can save some money) with some hair glued on the side, and a small pot filled with Kevin's very special chili recipe (or Halloween candy, which might be even better, depending on who you ask).

Although other kids might be dressing up as Elsa from Frozen or Captain America from the Avengers series, it's likely that there won't be another kid dressed up as Kevin from The Office.

This isn't the first time that Fischer has shared a brilliant Halloween costume of a character from The Office. In 2016, Fischer tweeted a hilarious photo of a little boy dressed up as Dwight from the show, according to BuzzFeed, complete with wire rimmed glasses and a beet.

Let her posts serve as inspiration for this Halloween. When little kids dress up like characters from The Office, it's pretty much guaranteed that they will "win" Halloween.