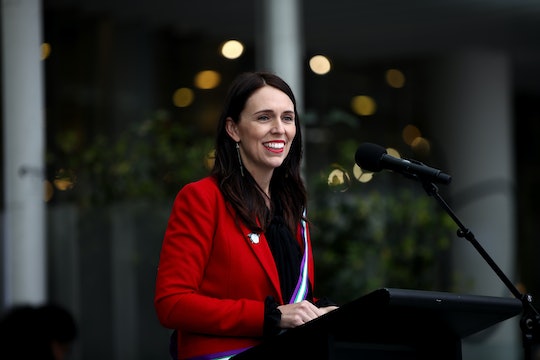 Jacinda Ardern has made history again. Well, to be fair, it's her daughter who's making waves this time around, but she had some help from her mom. On Monday night, Ardern — New Zealand's prime minister — gave a speech at the Nelson Mandela Peace Summit, and brought along her baby girl, Neve. And thanks to that, her baby may be the youngest person ever to attend the United Nations General Assembly. Eat your heart out, Guinness World Records.

Ardern is already the youngest premier in a century in a half in New Zealand, according to NPR. She is also just the second woman to have a baby while holding the highest office in a country, USA Today reported. When news of her pregnancy was first announced, the historic nature of it was heavily reported — Pakistan’s former prime minister, Benazir Bhutto, was also mentioned as the first elected world leader to give birth while in office, and even being the second to do so is still considered pretty impressive.

And clearly, Ardern is juggling both her duties as prime minister and her role as a mom with relative ease. Ardern is now the first female world leader to attend the United Nations general assembly meeting with her baby, according to The Guardian, and little Neve is along for the very exciting ride.

Ardern's partner and Neve's father, Clarke Gayford, posted on Twitter about Neve's visit to the meeting, and included her very official United Nations I.D. "Because everyone on twitter's been asking to see Neve's UN id," Gayford wrote, "staff here whipped one up. I wish I could have captured the startled look on a Japanese delegation inside UN yesterday who walked into a meeting room in the middle of a nappy change. Great yarn for her 21st."

At just three months old, not only is Neve the youngest person to ever attend the United Nations General Assembly, she may also be the only one to have a tiny badge listing her title as "First Baby" at the event.

Gayford is Neve’s primary carer, according to NPR, and he travelled with Ardern to New York to look after their daughter. In fact, while Ardern gave her speech, Neve looked on from her daddy's lap nearby. She's getting a first class education in politics and policy, and she's not even out of diapers yet.

Ardern commented on the unusual nature of her daughter's visit, and said, according to The Guardian, “I have the ability to take my child to work, there’s not many places you can do that. I am not the gold standard for bringing up a child in this current environment because there are things about my circumstances that are not the same,” Ardern said, clearly recognizing her privilege in being able to bring her baby to work in this way.

And not only was Neve's visit to the U.N. General Assembly a big deal for the event, but it was also a pretty big deal for the little girl for another reason: it was Neve's first international trip, as she was not able to join her mom for her recent trip to Nauru, according to Newshub.

Neve's historic visit was met with positive reactions from many in the international community. Samantha Power, former U.S. Ambassador to the U.N. under President Barack Obama, tweeted, "I cannot stress how much the @UN - and the governments that comprise it - need this," in reaction to a tweet about Neve's presence.

And U.N. spokesman Stephane Dujarric said of Neve's visit, according to Reuters:

Prime Minister Ardern is showing that no one is better qualified to represent her country than a working mother. Just 5 percent of the world’s leaders are women, so we need to make them as welcome here as possible.

And based on photos of Neve at the event, it looks like she felt right at home. Which is probably a good thing, because she's likely in for lots of historic appearances to come in her young life.