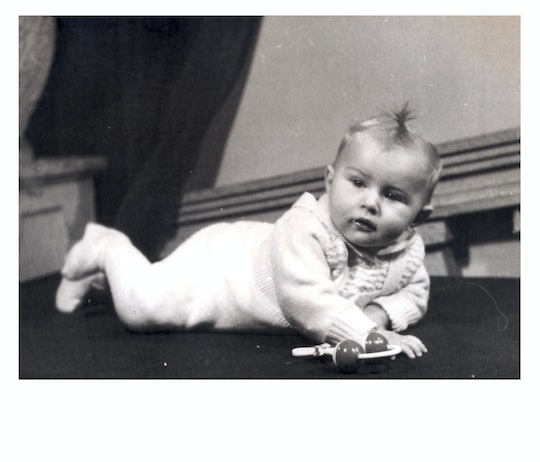 It's no secret that having a daily routine can lead to a number of long-term rewards. For infants and toddlers, routines can be especially beneficial as they provide them with a sense of structure, stability, and security while helping establish healthy habits like oral hygiene and daily grooming. But this baby routine from 70 years ago has some modern parents from all across the globes scratching their heads.

Earlier this week, the Facebook page for Australian parenting site the Mum's Grapevine shared a post that featured a sample routine for babies published some time ago. "Apparently this is how it was done 70 years ago," the Mum's Grapevine Facebook captioned the photo of a page that had been pulled from an old parenting book. "Two baths a day, orange juice, outside for naps."

While the schedule starts off with a 6 a.m. feeding and changing, it moves on to something called "hold out," which some commenters speculated meant to hold the baby over a toilet or newspaper for potty training purposes. It seems odd, however, that such an activity would be recommended for immediately after the baby had been changed.

At 10 a.m. the baby should be fed and "held out" again before being "put out of doors to sleep." While the idea of putting a baby down for a nap outside came as a shock to some parents on the Mum's Grapevine Facebook page, it's a practice parents in many Scandinavian countries continue to swear by. In fact, in recent years, the practice of letting babies nap outdoors has also reportedly seen something of a revival in the United Kingdom, according to The Telegraph.

What's more, some experts argue that there are benefits to catching some Zs outside. "Babies generally sleep better in cooler temperatures so the cool air from outside can help them sleep longer (provided they are dressed appropriately),” The Sleep Works founder and child sleep consultant Maryanne Taylor told the Huffington Post UK. "Also, older babies get stimulated by their surroundings very easily and being outside, can have a calming affect, lulling them to sleep."

A long, calm sleep may be exactly what the 70-year-old sample baby shared on Facebook is hoping to cultivate as there's noting listed on the schedule until roughly 1 p.m., some three hours after parents were encouraged to put their child outside to sleep. Babies should be given a drink of water at 1 p.m. and then allowed to kick and play, presumably with clothes on this time. In the winter months, this is the ideal time for baby's daily sunbath, according to the schedule.

At 2 p.m. the schedule recommends feeding and holding out the baby for the third time before having an outing and "Mothering" time. It's recommended to give the baby a drink of orange juice at 4 p.m. followed by a second bath at 5:30 p.m. and then another feeding and "holding out" session.

Parents are instructed to put the baby down for bed (with no pacificer, the lights out, the windows open, and the door shut) sometime after their 6 p.m. feeding. At 10 or 11 p.m. the baby can be fed again in a darkened room before being changed and placed back in their crib until 6 a.m. when the schedule would repeat all over again.

On Facebook, a number of parents seemed amused with the now-outdated baby routine and joked they "were doing it all wrong" according to the schedule. Others noted that the sample routine couldn't have been all bad as many a babe reared under such advice had survived to have children, and grandchildren of their own.

However, while a routine like this may have been considered ideal in the late 1940s and early 1950s, some of the listed activities contradict what experts recommend today. The Mayo Clinic, for example, doesn't recommend bathing babies every day, let alone twice a day. "Bathing your baby too much can dry out his or her skin," a note on their website reads. They recommend giving baths only three times a week until the baby becomes more mobile but remaining "quick and thorough" with diaper changes and burp cloths to ensure a child's vital areas are kept clean throughout the day.

Similarly, Kids Health warns against giving babies juice too soon or too often. "It's best to wait until after a baby is 6 months old before offering juice," their website reads, adding that "even then, pediatricians don't recommend giving babies juice often." According to Kids Health, juice is often full of extra calories and sugar which can lead to excess weight or tooth decay and cause diarrhea in infants and toddlers.

Parents looking to establish healthy routines for their children are encouraged to look beyond 70-year-old parenting books and instead seek out the advice of doctors, child care experts, family, and friends. And please, whatever you do, don't put baby out for a sunbath or outside nap without an ample amount of sunscreen.