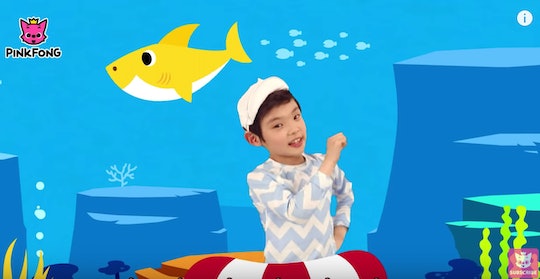 Every year, Coachella produces a few unforgettable moments and at the heart of this year’s was every toddler's favorite song and every parent's bane of existence — “Baby Shark.” Indeed, the “Baby Shark” EDM remix at Coachella had the festival's crowd roaring, Twitter on its toes, and presumably scores of parents at home wondering "Why?!"

The remix came after Jauz, also known as Sam Vogel, posted on Twitter that he’d remix the hit if he received more than 20,000 retweets on his post. The tweet had over 26,000 by Saturday, when he debuted the remix of the popular kids’ song in front of a crowd of festival goers. And, of course, the crowd went wild! The catchy remix began with the song’s chorus with an added bass line and eventually transitions into Darude’s award-nominated track “Sandstorm.”

What’s even better — the crowd and DJ seem to love it. Videos posted on Twitter show the crowd with their hands raised in the air nodding their heads to the beat of the remix. The DJ was filmed jamming to the song as well before jokingly apologizing on Twitter “to all the parents who had their kids listen to my Baby Shark remix debut thru all my swearing.”

The unlikely children’s song gained popularity late last year and even made it to Billboard Hot 100’s Top 40 this January. According to Billboard, the video of the song accumulated an upward of 2.1 billion views worldwide on YouTube and even ranked among the 30 most viewed videos on platform in its history. “Baby Shark” had received 3,000 digital downloads at the beginning of 2019 and placed second on Kid Digital Song Sales for 11 weeks starting last September, according to Billboard.

The kids’ favorite has inspired an array of merchandise, from coordinated t-shirts for the entire family to sippy straw cups made just for toddlers. This season, Target even released a line of bathing suits for boys and girls featuring the song’s animated characters.

And more recently, the popular parents’ favorite is also being used to teach kids CPR. According to USA Today, a father and CPR instructor pointed out that the song’s beat is perfect to sing while you perform chest compressions. He even taught it to his toddler daughter using the hit song. “Baby shark” joined other classics including “Stayin’ Alive” for its beat, which is 100-120 per minute.

On Twitter, a viral video garnered 630,000 and nearly 6,000 retweets after drag queen Marti Gould Cummings was filmed performing to the kid’s song at a restaurant, according to NBC News. “When a two-year-old comes to brunch you perform baby shark for them!!!” the video is captioned. The toddler in the video can be seen enjoying the performance, clapping his hands and bopping to the beat.

Clearly, this year’s Coachella’s “Baby Shark” remix is not the first time the song has gained traction — although this time around it was for starkly different age demographic. If anything, this Coachella DJ’s remix of the song that had festival goers jamming, paired with its past success, has reaffirmed the versatility that of the song that we all love…or, at least, have stuck on replay in our minds.